Taking a Chance by Jill Blake

She left behind her big-city medical practice to move to a small town. But taking a chance on love may be an even bigger risk… 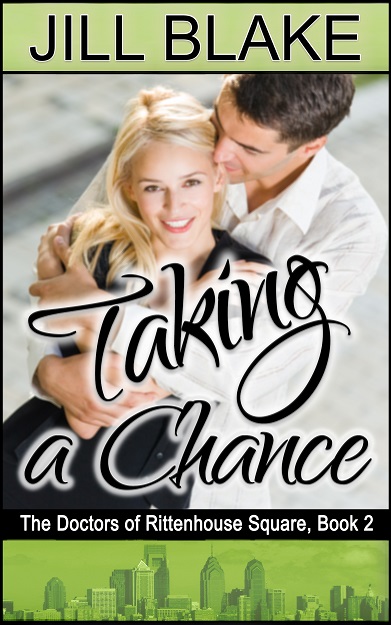 When Samantha Winters’ career as a big-city doctor leads to major burnout, she moves into a temporary position at a rural clinic. She soon discovers that she’s as out of place in the town of Oakridge as a pair of high heels in a cow pasture. The only thing stopping her from hightailing it back home? An unexpected attraction that just might turn into love.

Alex Kane is the local boy who made good.  He’s spent years building his computer start-up into the biggest employer in town.  Between that, and raising his sister’s orphaned kids, he’s ready for a break. All he wants is to cut loose and have some fun.  Too bad the new doc isn’t interested…. Or is she?


Waking out of a deep sleep to raised voices and what sounded like a battering ram at the front door, Sam grabbed her robe and rushed downstairs, flicking on lights as she went.

“Hold on,” she called, cursing beneath her breath as she stubbed a bare toe against the wooden leg of a waiting room chair. A quick glance through the glass had her adrenaline kicking into high gear.

Alex pushed through the door the moment she managed to unlock it. “Come on,” he said. “I need you.”

The words conjured up visions of Alex, bare chest gleaming in a wash of moonlight, biceps bulging as he reached for her amid a tumble of bed sheets. Oh, yeah.

“Matt’s been in an accident.”

Lust evaporated, leaving her chilled. She shoved her arms through the robe and grabbed her emergency bag. “What happened?”

“He was rear-ended. After the prom. Didn’t even make it out of the school parking lot.”

Memories of previous accident scenes flickered across her brain. In residency—half a lifetime ago—she’d spent part of her emergency rotation riding with ambulance crews as a first responder. It all came back to her: the wail of sirens, the pungent smell of spilled gasoline and blood-splattered pavement, the adrenaline rush of stabilizing patients in the field, the nerve-wracking moments it took to secure an airway and insert IV’s into veins that had collapsed from shock.

Alex gestured over his shoulder toward the black SUV parked haphazardly at the curb. “I’ll get him.”

“Wait, I’ll come with you.” Reality kicked in. No first responders here. You’re it, missy, Doc Cohen’s voice echoed in her head.