Separated from My Love by Dawn Brower

After careful research Trenton finds a way to travel through time, but will he be too late to save the woman he loves? 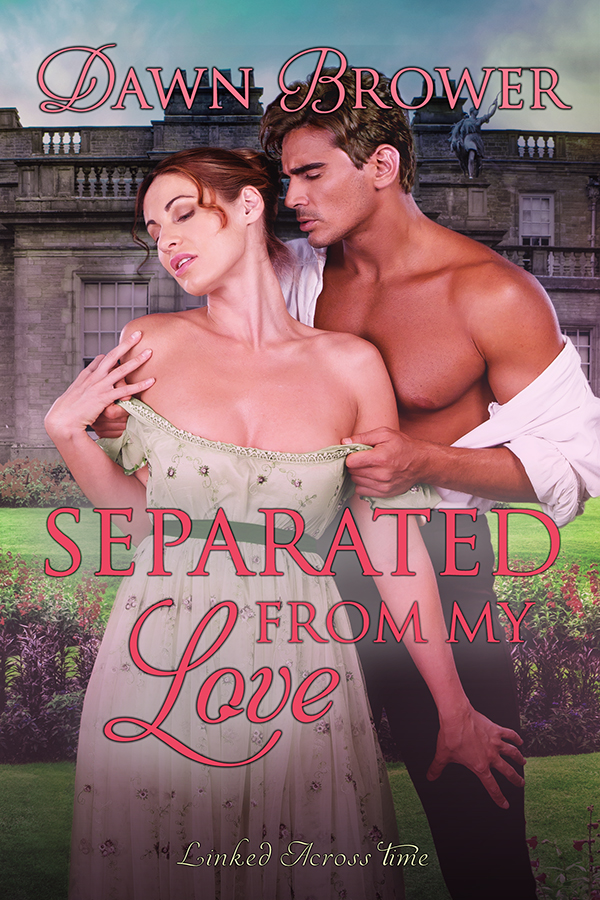 The love of Trenton Quinn’s life disappeared suddenly. He tried to move on with his life but couldn’t forget about her. When evidence arises suggesting she fell through a time hole he decides to figure out how to follow her to the past and bring her home.

Genevieve Byrne fell off a cliff landing in Regency England and total chaos ensued. Immediately upon her arrival she was kidnapped and held hostage by French spies. Only a miracle would see her through it and she prayed that somehow the love of her life would rescue her. But he never came and she had to find a way to save herself.

After careful research Trenton finds a way to travel through time, but will he be too late to save the woman he loves?


Trenton rubbed his temples. It could be worse, but he was at a loss as to how. He had to help them both up to bed. Neither one was in any condition to do it themselves.

“I think you both need to sleep off the alcohol you imbibed.” He picked up one of the decanters and stared down at it in disgust. “How much did you two drink? Never mind, I am not sure I want to know.”

“You’re not the boss of me,” Genevieve said angrily. She stood and wobbled over to him, then started to poke him hard in the chest. “In fact, I am done listening to you and your excuses. I waited and waited.” She stomped her foot and almost fell backward. “For what? You to come in here and look down your nose at me in disgust? Well, I have news for you. You’re far from perfect yourself, mister, and I’m through with lingering around like a piece of trash you forgot to discard. If you don’t want me, come out and tell me. I can take it.”

“Eve…” God, that was the last thing he wanted. Would she even remember this when she woke up? “Why don’t we have a long talk in the morning? This isn’t the time to hash this out.”

“Wimp,” she said and attempted to knee him in the balls she missed, but not without still doing some damage. He fell to the ground so she wouldn’t try it again. Best to let her think she was successful. “Be a man and tell me how it is.”

“Have mercy,” he begged.