Secrets in Scarlet by Erica Monroe

When a bluestocking with a scandalous past meets a cerebral sergeant, sparks fly...but when a killer comes after them, they'll have to risk it all to survive in the Spitalfields, London rookery. 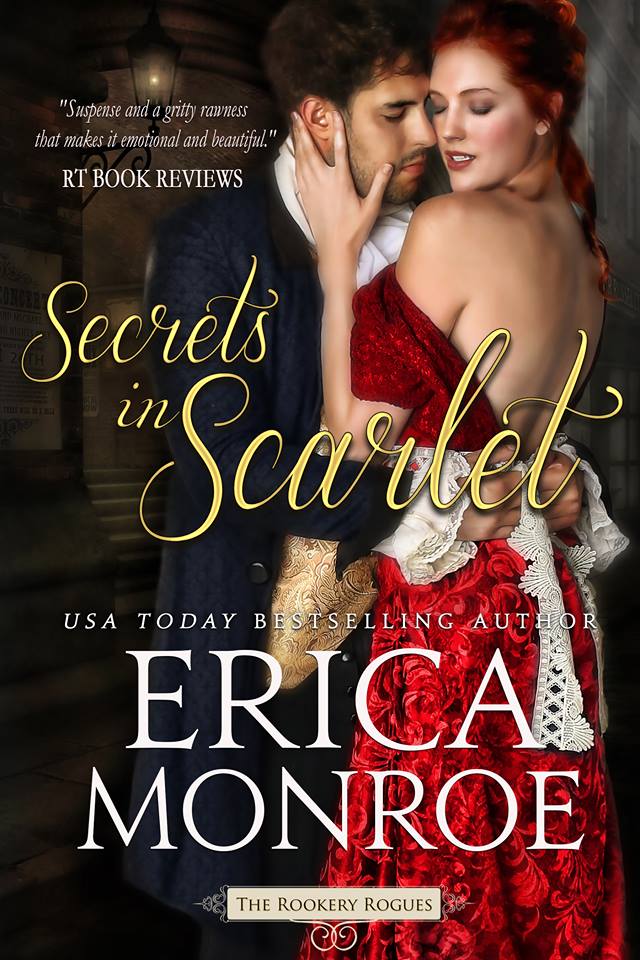 Scoundrels, thieves and rebels inhabit the rookeries--where dangerous men fall in love with fierce women.
HIS BUSINESS IS DISCOVERING SECRETS
When a girl is murdered at a factory in London, Sergeant Thaddeus Knight of the Metropolitan Police comes in to investigate. But it's not just the factory owners that Thaddeus wants information on-the devilishly intriguing Poppy O'Reilly is a puzzle he'd like nothing more than to solve.

HER LIFE DEPENDS ON KEEPING HER PAST HIDDEN
All it took was one scandal for Poppy to lose her reputation. Shunned by polite society, she's retreated to the one place no one from her old life would look for her: the rookeries. Protecting her young daughter is the most important thing to Poppy, and Thaddeus threatens the false identity she's carefully constructed. The last thing she should do is allow Thaddeus close to her family, yet she can't stay away from him.

With danger around the corner, will the secrets of a scarlet woman lead to their undoing?
-------------
Secrets in Scarlet is a dark, gritty, and sexy full-length romantic suspense set in pre-Victorian working class London. While it is book two in the Rookery Rogues series, it can be read as a stand-alone historical romance.


“YOU’RE MEANT FOR great things, my boy.” Leaning back in his claw-footed chair, Inspector Jonah Whiting smoked a cheroot and regarded Thaddeus with barely veiled impatience. “That business with the resurrectionist’s ring was the luckiest break you’re liable to get in this business.”

Three months prior, Thaddeus had apprehended Jasper Finn in a workhouse cemetery in East Smithfield. While the arrest had led to the captures of most of Finn’s grave robbing ring, the real bounty had been in tying Finn to several other unsolved murders in London.

Whiting wouldn’t let Thaddeus forget this grand success for the rest of his whole damn life.

The inspector smiled one of those simpering smirks meant to ingratiate Thaddeus to him. “Superintendent Bicknell has taken notice. If you play your cards right, you too could have one of these offices. Inspector Doughty is set to retire in a month.”

“Aye, it’d be an honor to be considered, sir.” Nervousness quivered in his stomach at thought of taking Doughty’s place. To be an Inspector at twenty-four years of age was unheard of in the Met, but Thaddeus had worked harder than anyone else on their route. Certainly harder than the other contender for the job, Michael Strickland.

As an inspector, Thaddeus would be able to make a real difference in the Spitalfields rookery.