Robots. The New Era. Living, working and investing in the robotics society of the future. by Andrea Forni

This book is an exciting journey of discovery through next-generation robotics where we encounter co-worker robots, autonomous vehicles, humanoid robots, civil and military drones, robo-surgeons and other wonders that are no longer science fiction but ver 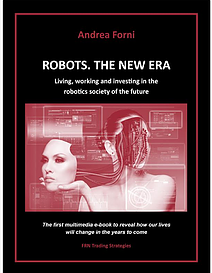 This book is an exciting journey of discovery through next-generation robotics where we encounter co-worker robots, autonomous vehicles, humanoid robots, civil and military drones, robo-surgeons and other wonders that are no longer science fiction but very much part of the real world.

Robotics will become a key factor in the development of the global economy over the coming years and it will lead to a radical change in how millions of people live and work – as was the case with the advent of the personal computer in the 1980s, the Internet at the end of the 1990s and the smartphone in the last five years.

Robotics is attracting investors who see a profit opportunity. As a financial analyst, the author’s interest goes beyond cultural and emotional considerations to include market analyses and the examination of investment opportunities in robotics companies publicly traded worldwide.

The book features many comparison tables of 200+ U.S., European and Asian robotics companies, 68 images and dozens of videos, public documents and website links.


The book is sold worldwide in Italian, English and Chinese language. The book is really appreciated by the financial community while is not interesting for robotics geeks. The book is also appreciated by common readers who like to understand what are robotics and artificial intelligence and their impact of their lives and jobs.


Technology is the driver for acceptance of mass robotics. The more friendly and refined that robots become, the easier it will be for them to be incorporated into society as increasingly large sectors of the population accept them. Constant improvements in the fields of hardware and software are essential to respond to the needs of the consumers of robotics who will seek new, simpler functions that can be implemented immediately (as has happened with personal computers and smartphones over recent years). For example, the noise that a humanoid robot makes when moving is still unacceptable over extended periods in a home environment. The development of technologies to allow assistive robots to move silently will encourage their acceptance by society and widespread use in private homes and offices.

The adoption of service, assistive and collaborative robots will receive a boost when companies and individuals recognise that their introduction will mean significant benefits in terms of reducing the production costs of goods and services through increased efficiency and productivity. An example would be the replacement of a lorry driver with an autonomous driving system that does not require rest breaks, does not strike, does not ask for wage increases and is less likely to have an accident through driving error (fatigue, distraction) or as a result of illegal behaviour (use of drugs or alcohol). Another instance could be the use of a robot caregiver in the home of an elderly person...

...The robot would be vigilant and fully operative 24 hours a day and remain in constant contact with the assisted person's family. The use of such a robot would allow home care costs to be reduced and the efficiency of the service increased. Finally, the introduction of collaborative robots to small and medium manufacturing enterprises to share work with operators would relieve workers of the most boring, repetitive tasks.