Reverse Speech in Theory and Practice by Joshua Schmude

Reverse Speech in Theory and Practice was written over a 4 year period and details how one may use their Unconscious Mind to predict the outcome of Horse Races, or any other venue they desire. Written by Joshua Schmude, a student of David John Oates and c 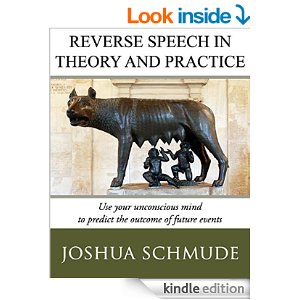 I am a certified Reverse Speech Analyst who was trained by the developer of Reverse Speech Theory David John Oates. This book teaches people how to use their own speech reversals to predict the outcome of future events and using qualitative research methodologies, explore the precognative capabilities of the human Soul.


The book has ranked in the top 100 of the curiosities and wonders section on Amazon in the past two years and sales have been steady throughout that time. I am about to start a marketing campaign on Coast to Coast AM as well as do a Press Releasee. I would like to have it translated before I do that. My book is availible in English workdwide but I would like it translated into German, French, Spanish and Japanese.

Sample text:
Dreams, what are they? Where do they come from? Why do we have them? Throughout history mankind has been both fascinated and terrified with the content of dreams. Many claim they never have dreams, in truth, we have them all the time, unfortunately in most cases, we don't remember. Dreams have been considered an important aspect of the human psyche for thousands of years by numerous cultures; proof of this rests with various religious texts as well as earlier legends and myths stemming from the Sumerians, Muslims, Jews, Greeks, and Romans. Both the Old and New Testaments contain many clues hinting to the collective view held by our ancient ancestors concerning dreams or visions coming from a Divine source. For example in the Old Testament, Job 33:15, a passage which sheds some light on this subject is apparent. "In a dream, in a vision by night, when deep sleep falleth upon men, and they are sleeping in their beds: Then he (God) opens the ears of men, and teaching, instructs them in what they are to learn." Another biblical example concerning a cultural belief that certain dreams come from a divine source can be found in the book of Numbers 12:6, "He (God) said to them, hear my words, if there be among you a prophet of the Lord I will appear to him in a vision, or I will speak to him in a dream," In the Catholic tradition, the phenomena of Divine revelation through dreams is referred to as "somnia a deo missa," or, dreams sent by God.