Remember the Past by Maria Grace

When Elizabeth's father, Rear Admiral of the White, Thomas Bennet, retired from His Majesty’s navy, little did she know her family's battles had only just begun. 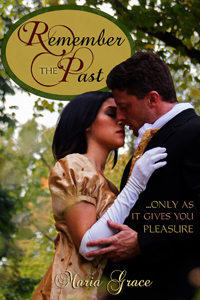 Elizabeth Bennet’s father, Admiral Thomas Bennet, assures his daughters that his retirement from His Majesty’s Navy will be the start of a new life for them all. Little does he know his family's battles have only just begun.

Well-connected and in possession of a good fortune, their entry into society should have been a triumph.  However, their long-awaited first season in London proves a disaster, and the resulting scandal sends the Bennets fleeing to the wilds of Derbyshire.

Widower Fitzwilliam Darcy, the master of Pemberley, wants for nothing, most especially not a wife. From the moment the Bennets arrive in Derbyshire, Darcy’s neatly ordered life turns upside down. His sons beg to keep company with their new playmates, the young Bennet twins. His mother-in-law sets her cap for Admiral Bennet. Worst of all, Darcy cannot get his mind off a certain bewitching Miss Elizabeth Bennet, but she has sworn never to let another gentleman near her heart.

Darcy’s best efforts to befriend and assist the Bennet family go horribly awry, alienating first Miss Elizabeth, then her father, and finally endangering what both men hold most dear. Can the two men Elizabeth loves most set aside their pride to prevent catastrophe for their families and win the love they seek?


The book just released 7/24/14, so there is not a lot of data available yet.  It did rank on three top 100 lists on Amazon on its first day of sales.

My other four book all sell consistently and have since their publication.

I have a well esstablished reader base with three different websites and an active facebook presence to publicize the books. I have several in peson events scheduled this year to publicize my books to an audience that woud include Spanish-speakrs.


Everyone has a past. Oftentimes it behooves one to think of the past only as its remembrance gives one pleasure.

“I do not see how you can disagree. Truly, I do not.” Lady Catherine’s features settled into the familiar expression of a school mistress who knew best: lips pressed tight, eyes narrowed and staring down her nose. She perched on the overstuffed chair and folded her hands in her lap.

Fitzwilliam Darcy opened his mouth to comment but shut it before the words escaped. When his mother-in-law wore that expression, only a fool considered arguing. The dear woman possessed the Fitzwilliams’ hallmark stubbornness in far greater measure than her petite stature implied.

“If my Anne were still with us, she would agree—”

“With what would she agree?” Richard Fitzwilliam poked his head in the doorway.

Darcy jumped and twisted around in his seat. “I swear you will drive me barking mad!”

“How so?” Fitzwilliam sauntered in. His heavy boots barely whispered against the carpet.

“Sneaking up on me! One day I will—” Darcy rose and shook a pointing finger.

“Balderdash! You would do no such thing, and even if you did, you would stand no chance—”

“Yes, yes, I know, against a retired colonel of His Majesty’s army. I know. You say it often enough.”

Fitzwilliam chuckled and dropped onto the settee. His long legs stretched into the center of the room, perfectly situated to trip the unsuspecting. “You are merely unhappy George and David have learned from their uncle, the hero. What have they done this time?”