Realm of Blood and Fire by Dionne Lister

Book 3 in Circle of Talia trilogy YA epic fantasy 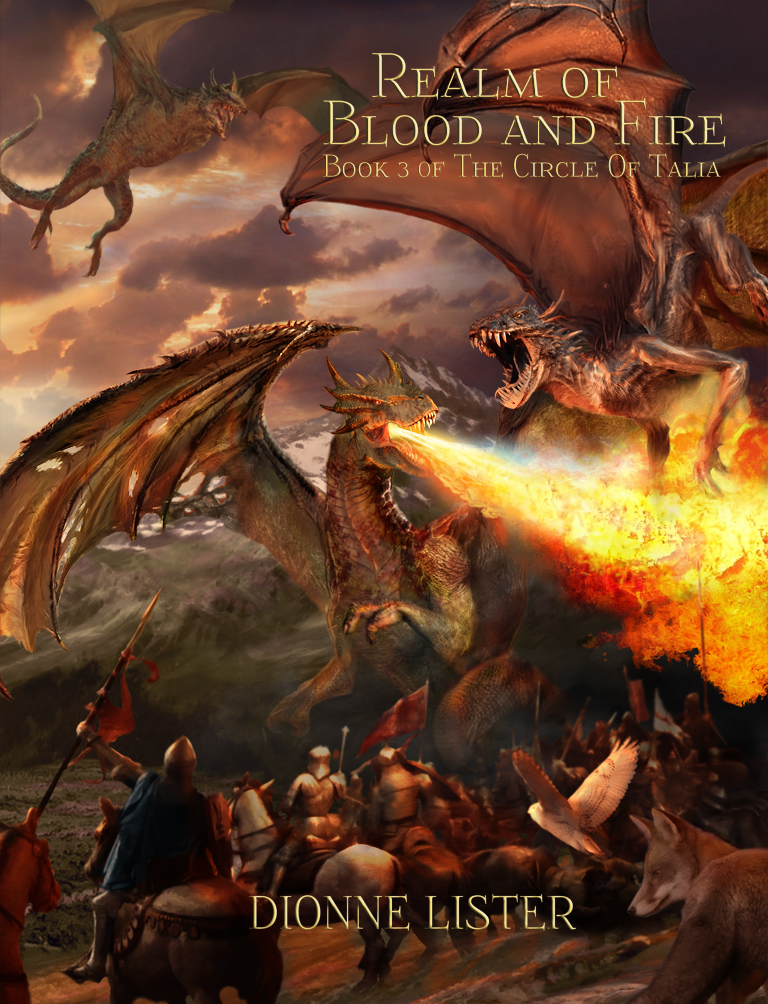 The final book in the bestselling young adult epic fantasy series The Circle of Talia.

While the realmists watch, powerless to intervene, the gormons lay waste to Talia, city by city, moving closer to Vellonia each day. As the final battle nears, The Circle can’t meet the conditions of the prophecy, and hope is dwindling. Can Bronwyn and Blayke do what they must — destroy those they love to save their world?


This book has sold around 3000 copies and has made top #100 in its genre categoreis on Amazon and iBookstore. It sells a few copies a week across all channels and I am actively promoting the series. It's featured in the 'What's Hot' section in UK iBookstore fantasy/scifi category and has been there for the past few months. When it was released, iBookstore featured it for a week on the front page of all it's English-language stores.


The rooftop garden of the monastery on the Isle of the Dead Souls remained silent. Realmists Avruellen and Arcon had been standing in the same position maintaining the circle for an hour while they waited for their protégés to return from activating their amulets.

Both Bronwyn and Blayke had fallen to kneel on the cool grass, their chins resting on their chests; Bronwyn’s dark hair curtained around her face. The moon had slipped lower, lengthening the shadows. From their vantage point a few feet away, the creaturas watched.

Avruellen saw Bronwyn’s head twitch, and it was all she could do not to break the circle and rush to see if her niece was finally coming out of her trance. What was taking them so long? What was happening? When the realmist lifted her eyes from her niece, she met the calm gaze of Arcon. While his eyes held sympathy and understanding, there were no words he could offer—he was just as worried as his sister.

While the realmists maintained their silent vigil, a cacophonous battle raged in the Sacred Realm.

Devorum, please don’t! Bronwyn shouted into the mind of the dragon as she lay smothered under her brother. She squeezed her eyes shut, knowing her plea would fall on deaf ears. At least it will all be over quickly, she thought. And then . . . the gaping maw and tearing teeth didn’t come. Blayke’s grip on her arms relaxed, and Bronwyn felt him let his breath out. They should have been eaten by now. What had happened?

The hulking dragon spoke into their minds. Get up, children. Look into my eyes, if you dare. Blayke pushed himself up and reached a hand down to help Bronwyn stand. She looked at Blayke, and he shrugged. They turned to Devorum who loomed over them, red eyes glowing, vast nostrils sucking in air before blowing it over the realmists with each breath. Bronwyn coughed at the sulfuric odor but held the dragon’s gaze.