Pride Before the Fall by Rebekah Lewis

Hermes and Hybris are back, getting into even more trouble than before. 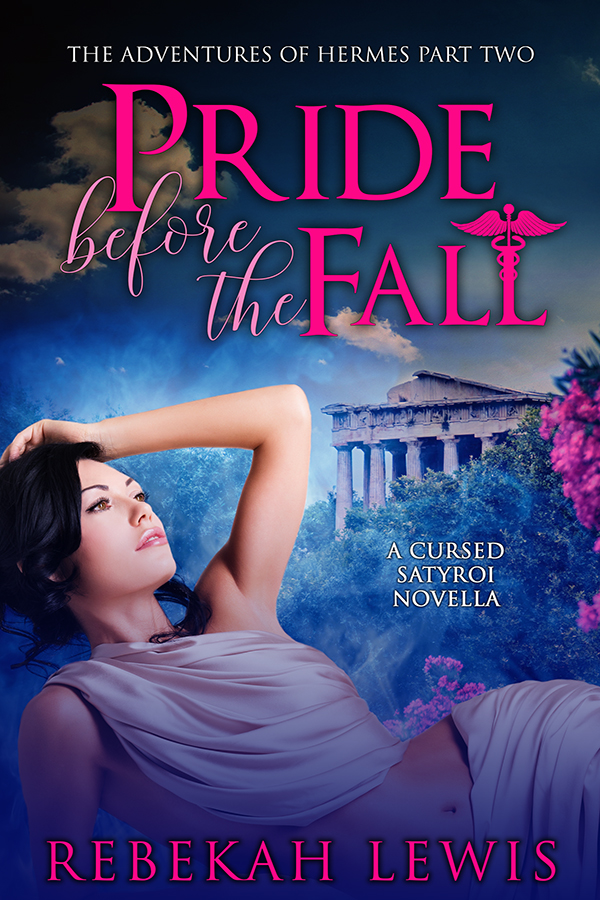 Zeus doesn't ask for much. Just for Hermes to deliver his messages, run his errands, obey his every command and, oh yeah, not to interfere with the Satyroi as they quest to rescue a close friend and retrieve a mystical instrument called the syrinx from Dionysus. So Hermes shouldn't be surprised when Artemis calls in a favor and it involves something Zeus has expressly forbidden him from doing.

Within the past forty-eight hours alone.

Now that Hybris has finally gained Pan's trust, there's only one obstacle in the way of starting over again with her family: Hermes can't forgive her for walking out of them so long ago. Devising a plan to win his admiration back, Hybris sets out on a dangerous mission that could go wrong at any moment. A risk she's more than willing to take if Hermes may stop avoiding her as a result.

When their paths cross unexpectedly, can they ignore their feelings for one another long enough to accomplish their tasks? Or will the danger surrounding them create a domino effect of damage that would affect not only each other, but the Satyroi as well?

Unable to leave now that he’d come so far, he approached a pair of large, marble urns that stood about five feet high and three feet in width that should have been used as tree planters. Someone must have removed the trees and soil since they were the only empty vessels along the wall, but why? Inside one, he discovered Artemis, her hair the exact pale shade as the marble surrounding her.

He snorted and leaned one arm on the lip of the urn. “Do I even want to ask?”

Her silvery eyes flashed annoyance as she scowled and gestured to the left with both hands. “Get inside the other urn.”

“Excuse me, what?” This had to be how those humans on prank television shows felt. He glanced around but didn’t find anyone watching.

Hermes shrugged and floated up above the second urn. “Okay, Scooby Doo, but no Scooby snacks for you if this doesn’t have a really good reason.” Was cable addiction a thing? He’d been watching cartoons with his grandson a lot even though Leonidas was too young to understand them. He dropped into the urn and whispered, “Okay, I’m out of sight. Care to explain why we are hiding outside Zeus’ temple like no one is going to notice?”

“I waited for you to leave. You were in there, like, three hours.”

Ouch, it’d been a long meeting, but she had to be exaggerating. Zeus had gone on and on, and then Hera returned wanting to just go to war over Apollo, but Zeus had shot her down.

“What would you have done if I hadn’t walked this way?” he asked. “I could have flown right out of Olympus.”

Collection/Series:
The Adventures of Hermes