Phoebe and the Doctor by Sandy Raven

Miss Amelia's beloved younger brother, Harry, returns to England after the war to return the personal belongings of his dead friend to that man's two sisters and finish his education to become a doctor; what he didn't plan on was falling in love with the 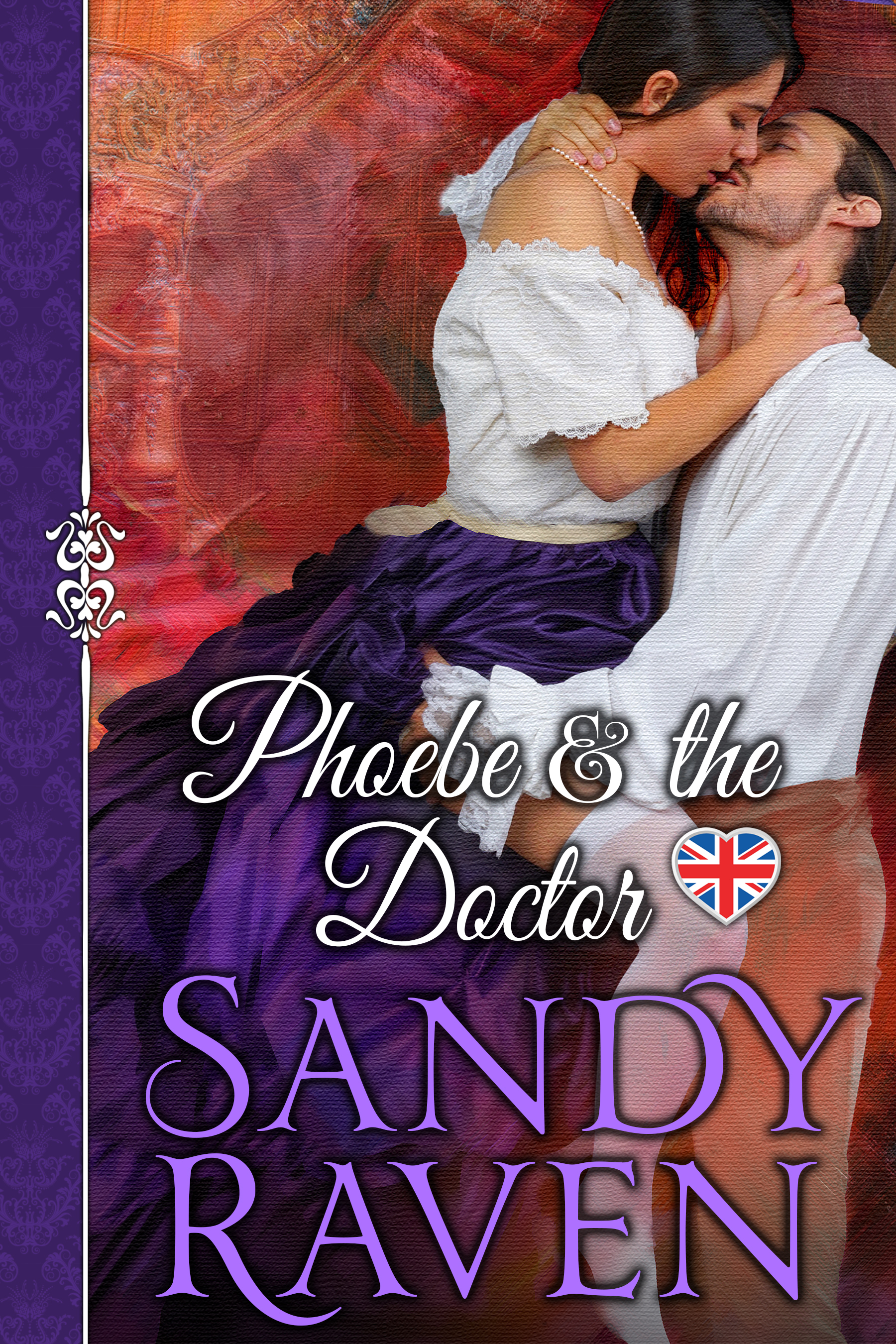 Harold Manners-Sutton, the brother of Amelia, Duchess of Caversham, was abducted with his friends as they journeyed back to Cambridge after their Christmas break. Even after the Duke found them, he and his friends chose to remain with the crew of the ship they landed upon. Four years later, after the death of one of his two best friends, Harry returns to England to deliver to his friend’s sisters the personal possessions of their brother.

Phoebe Grenard, lost her half-brother to a tropical fever after he’d survived a press gang abduction and several years of fighting the Americans and French. The timing of the arrival of her brother’s two best friends was fortuitous for both Phoebe and her cousin, Francine, who’d been threatened just mere moments before the two young men walk into their dress shop. The men threatening Phoebe claim her father owed their boss, Mr. Edgar Donovan, a very large debt and had sold both Phoebe and her mute younger sister, Lydia, to Donovan to pay the debt. Phoebe wanted to see proof of this debt, and if it was, indeed, a valid debt, she wanted to make arrangements to reimburse this man. She wanted to prove to them that she was not her father.

Harry agrees to take Phoebe and Lydia with him to London to see the moneylender. He would never have agreed to bring the younger girl if not for her desire to regain her memory of the night he was abducted with their brother and their three friends. During the voyage south, and their time staying with his sister, Harry and Phoebe realize they cannot deny their attraction to one another. He makes arrangements, without consulting Phoebe, to pay the debt for her, then he hoped she would agree to marry him.

Furious that he has not held to the plans they agreed to before leaving her little village near Newcastle, Phoebe goes to see Donovan on her own. The man reveals that her father was the one who arranged for her brother and his friends to be abducted that night because her father had a debt to pay—to him. Her father again borrowed money and gambled himself back up to a ridiculous amount that he was never going to be able to pay. Her father then sold her and Lydia to him—Donovan—pay it. Donovan showed her the ledger page, with her father’s mark, validating the debt in her mind. In looking at the ledger sheet, her father gave one condition—that they go into a workhouse, not one of the brothels the man owned.

As it turns out that very night, Donovan had a contract to provide two virgins to a group of men having an upcoming party. And, because her father ran off with the girls and didn’t fulfill his end of the bargain, Donovan didn’t think he was bound to keeping his. If everything goes as planned he will deliver Phoebe to the party, and then his cohorts will deliver the second girl.

Phoebe realizes she’s trapped. She also realizes that if she left this building Harry would never find her, so she kept stalling hoping he’d arrive in time because she had arranged for Lydia to wake Harry if Phoebe wasn’t back in their room in three hours.

Harry wakes the Duke, and they—along with Lydia—leave for the tavern where he knew he would find Donovan, and possibly Phoebe. They arrive right as Donovan’s man is trying to force Phoebe into a carriage. A scuffle ensues and Donovan is stabbed, the man holding a knife to Phoebe is taken into custody, and Lydia recovers her memory of the night her brother was press-ganged and has found her voice, telling Harry and the Duke everything she remembered seeing that night, and telling her sister about her father’s threat if she were to speak at all of the events that happened in the alleyway on that fateful night.

After his brother-in-law, the Duke of Caversham gives him some sage advice for getting the young woman to agree to marry him, Harry takes Phoebe on a carriage right to a picnic location that is literally right in the backyard. He asks, and she says yes to their future together.


This is the 8th book in my series, The Caversham Chronicles, and has no sales history yet. It releases in English on July 30th.


Phoebe Grenard closed her eyes as she leaned back on the front door to the dress shop she and her cousin Francine operated in the tiny village of Cleadon. She said a quick prayer of thanks that Imogen Sparks’ mother trusted her, and Francie, to create her only daughter’s May Queen dress. Especially since the death of Aunt Frances two month earlier, Mrs. Sparks had been one of the few customers, along with Mrs. Crumstokes, who remained supportive of Francie and Phoebe continuing to operate the dress shop.

Mrs. Sparks, whose husband was the village’s dry goods merchant, had also been a friend of Phoebe’s aunt, as the two stores had been across the cobblestone road from each other for many years. But it was starting to become obvious to Phoebe that two young and unmarried young women running a place of business had been frowned upon by many of the locals, a few of whom had—likely with the best of intentions—suggested that she and her cousin should consider marrying and becoming mothers. That, along with a few other incidents, led Phoebe to believe that the villagers had no qualms regarding widows running a business, but they obviously drew the line at unmarried ladies.

The proof was in their receipts at the end of each day. There had been a noticeable decrease in the monthly revenue again this month, even more than the month before. Phoebe and Francie had talked about it earlier that very day. Francie had noticed a few of the customers hadn’t returned since her mother—Phoebe and Lydia’s aunt—had passed away. Ever the more good-hearted of the three of them, Francie suggested that maybe it was due to the harsh winter they just come through and that people were depleted of any extra coin because of the cost of food for both man and beast.