#1 New York Times bestselling author and entrepreneur Scott Dikkers tells the hilarious, personal story of how he built The Onion into one of the most beloved brand names in the world without spending a penny on marketing. 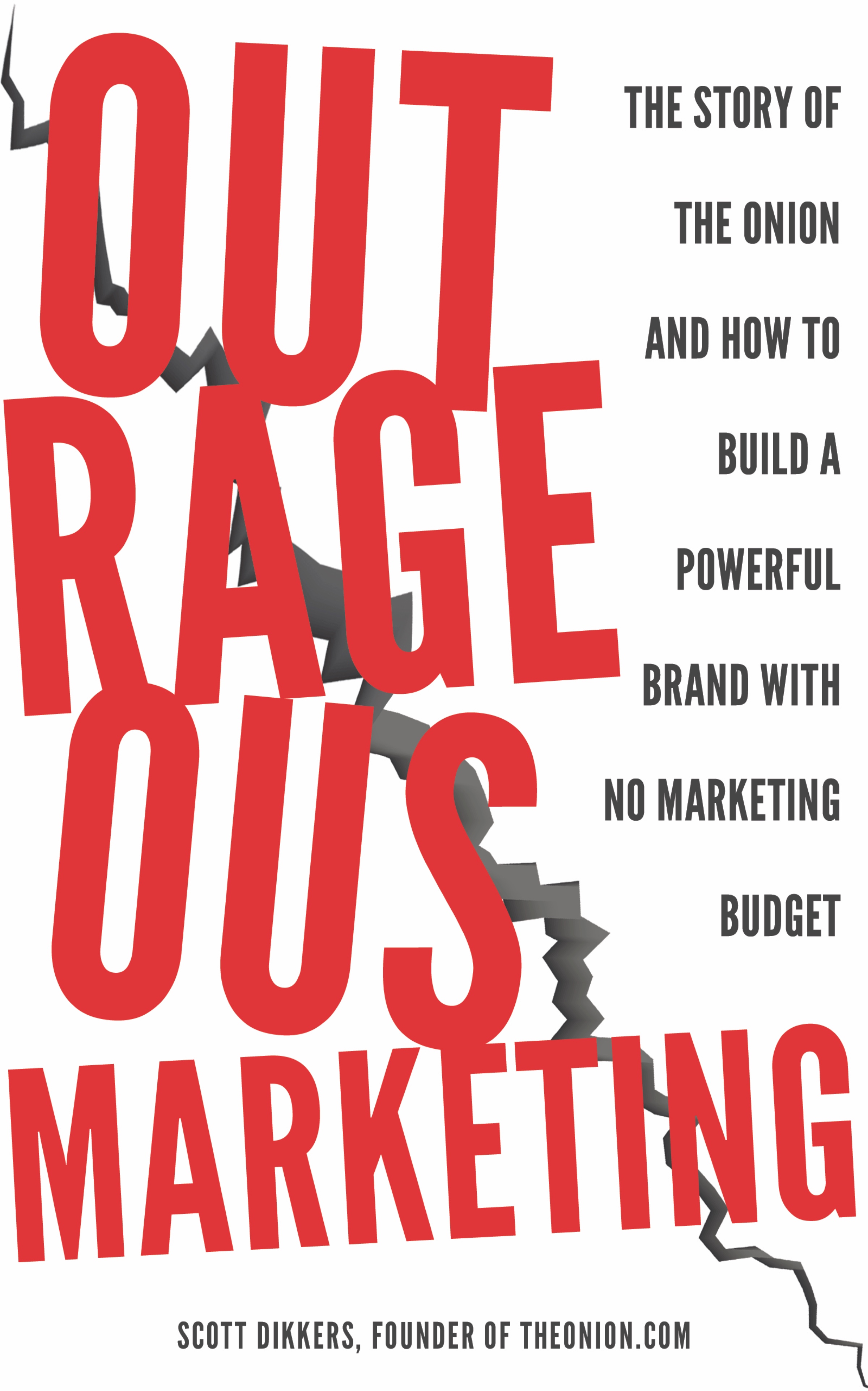 #1 New York Times bestselling author Scott Dikkers tells the hilarious, outrageous, and deeply personal story of how he built the most trusted news source in America, The Onion.

Of course, all the stories in The Onion are fake, and anyone who takes them seriously is the true butt of the joke. But Outrageous Marketing tells the actual, uncensored story of The Onion.

The Onion started as a small college humor newspaper in 1988. How did it grow to become a worldwide comedy brand with millions of social media followers and rabid fans today? Brands today tend to follow the herd when it comes to marketing and branding, but often it's running in a different direction of the herd that gets you noticed.

The Onion did the opposite of what brands are supposed to do. The Onion didn't listen to its customers. It didn't give them what they wanted. It didn't engage with them. It was never "authentic." In fact, everything The Onion printed was fabricated, spoken through a phony facade. This was not by accident. It was calculated and executed with precision.

• How to court, woo, and seduce people to fall in love with your brand!

• How to recruit the very best and brightest minds in your industry to work for you!

• The single-best way to manage creative people on your team and unleash their FULL potential!

• The secret to making every single day of work feel as smooth and enjoyable as downhill skiing!

• The one thing every brand builder MUST focus on (hint: it’s not profits)!

• How to reach more people and create more fans using one, super-simple principle (hint: this is what made The Onion world-famous)!

• The fastest and most effective route to innovation—at work AND in life!

• The ONE thing every brand must do to compel extreme employee advocacy and fuel creative success!

• How to find your brand’s identity!

• The ONLY way to achieve quality!

• How to get the attention, love, and undying loyalty of your customers!

In flaunting the best practices for brand marketing, The Onion discovered a marketing secret. Not everything is as it seems in the fiercely competitive digital landscape. Sometimes the most counter-intuitive—the most outrageous—marketing strategies are the most effective. With diminishing attention spans and intensifying competition, making fans fall in love will be the lifeblood of brands in the coming years.

Author Scott Dikkers, founder of theonion.com and the publication's longest-serving editor-in-chief, takes you back to the hardscrabble creation and unlikely rise of The Onion to a multi-million-dollar entertainment brand. Along the crazy and heart-wrenching journey are powerful principles and marketing ideas that apply to any kind of product or service, principles for forging a deep connection with customers, making a bigger impact on the world, and achieving the kind of meteoric success that makes headlines.


Debuted Nov. 6, 2018 as a #1 new release on Amazon, has consistently ranked in the top 100 in at least two categories on Amazon since its release.


The president of the United States was Ronald Reagan. The big movie at the box office was Big, which made Tom Hanks a major box-office star. The “big three” networks, ABC, CBS, and NBC, still ruled TV. George Michael, INXS, and Whitney Houston topped the Billboard charts. USA Today was seven years old and widely decried as a portent of the “infotainmentization” of journalism. Only about ten percent of households had a personal computer. No one had a cell phone.

In this unrecognizable era, a proto-Onion was hatched on a piece of paper, an 11x17 calendar that James Sturm showed me one day on Bloom Street in Madison. It looked like a pancake-house placemat with ads from local businesses around the edge. It also featured a calendar that listed important dates for students to know (like when classes started). In the center was a big “Down and Out Dawg” cartoon. James told me he’d made a couple hundred dollars doing the project for someone named Tim Keck, who had worked on the ad staff of The Daily Cardinal. Tim sold the ads for the calendar.

James introduced me to Tim because Tim was interested in doing a calendar like this with me featuring “Jim’s Journal.”

A “Jim” calendar never happened. Tim instead partnered with another UW student who, as far as I knew, had no advertising sales experience but was nonetheless a charismatic and capable guy named Chris Johnson.

Tim and Chris were smart, funny, good-looking guys. They were cool. Whenever I saw Chris out and about in town, he always had a different, incredibly beautiful young woman on his arm. But they weren’t frat boys or preppies. They weren’t schmoozes. They were genuine, intense, and hard-working former nerds, most likely, who had grown into extremely attractive and confident young men.