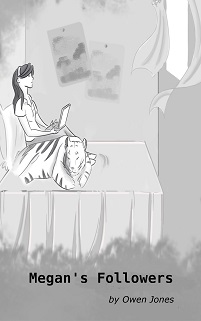 Megan is a 13-year-old girl with Supernatural powers. Some of them are still only partially developed and others are working, but she doesn't know how to use them yet.

Her biggest problems for the moment is finding a Teacher who can show her how to handle them properly. Another is that she doesn't know anyone who knows anything about Supernatural powers.

In fact, her mother is violently against the Supernatural, as was her mother before her. The only people who seem willing to help her are dead, not that that makes any difference to Megan.

She embraces their help with open arms

Megan's Followers refers to her followers on the Internet. Since she has just passed thirteen, her parents and the multi-media sites now allow her to use them, so she sets up Twitter, Facebook and LinkedIn accounts.

Wacinhinsha teaches her about communication and how it can be perceived on a Spiritual level.


The book sells well, but sales are dependent on readers buying its predecessors - so marketing

It was Saturday morning on a Bank Holiday weekend and Megan awoke from a dream in which she had been to the beach with her grandfather – her mother’s father, who had died before she was born, but whom she had always seen quite often, for a dead person. They had travelled to a beach that he had shown her before in the first lesson that she had ever had on flying or Astral Travelling, as they called it.

She loved the sensation of freedom that it gave her and she was pleased that she was now capable of remembering where she had been and with whom, if she hadn’t gone alone. That ability to remember was a fairly recent development, which she had been told to expect as she got used to performing her new trick as she still thought of it, despite having been told several times that it was something quite normal that everyone could and indeed did do regularly. The ‘trick’, if there was one, was to remember where one had been and what one had done.

Megan was not the sort of person to lie in, especially when the sun was streaming in through the open curtains, so she got up, put on her dressing gown and slippers and went downstairs, following the glorious smell of frying bacon. She had been told in school in one of her lessons about the dangers of eating too much meat and cholesterol, but a traditional breakfast of cornflakes, followed by bacon and eggs, toast and tea was still her favourite meal of the day. She liked the smell of coffee, but she was not allowed to drink that until she was sixteen, because her mother had some idea that it could hurt a young person.

She wasn’t sure whether that was true and she didn’t really believe that meat could harm her either, especially not when you were a growing, active young teenager. Adults had some very strange ideas, she thought sometimes.