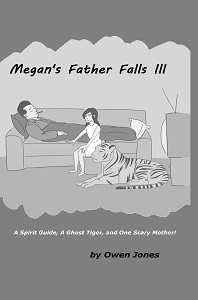 In 'Megan's Father Falls Ill', Megan is concerned about her father's health, because she has never seen him ill before, so she decides to try using her psychic powers to cure him. In the end, she uses a combination of her gifts and the Internet to discover ways to help him recover.

Wacinhinsha gives her a lecture on medicine and its application, especially from the Spiritualist point of view.


The book sales for this volume are OK, but dependent on sales of the previous volumes.

Megan usually arrived home from school an hour and a half before her father got in from work, and it had been her habit for as long as she could remember to run downstairs to meet him at the front door. This day was no different in that regard, but she stopped at the foot of the stairs and watched him take his jacket off.

He had the look of someone who had just run his first marathon without ever doing any training for it. He looked as if he were worn out and in great pain.

“Whatever is the matter, Daddy?”

She went to him and kissed him on the cheek as she always did.

“You look pale too, Daddy. Come in and sit down. Have a cup of tea. It might make you feel better.”