Love Of The Billionaire by Adidas Wilson

Alec is one of the richest, most powerful men in the world. His company and investments are known worldwide. He is a billionaire playboy that is suave and charming, and his conquests are legend. He is a man with strong appetites and his romance in the bed 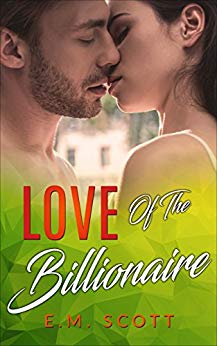 Alec is one of the richest, most powerful men in the world. His company and investments are known worldwide. He is a billionaire playboy that is suave and charming, and his conquests are legend. He is a man with strong appetites and his romance in the bedroom is only second to his love in the boardroom. Alec goes on a crusade of romance and lust, satisfying his every taste and whim as well as those of the women he meets on the way.

A master of pleasure and seduction, few women can resist him, and each conquest ups the ante and tops the last. However, Alec starts to feel something is missing in his life and starts to think he might want more although he cannot quite put his finger on it. Can Alec balance his life of love with his life of business? Can he find what he is missing and have everything?

It had been a peaceful flight on his private jet. Alec had been working hard, acquiring another company into his own and enjoying the stock boost that came with it. He had a week of strategic decisions and moves of titanic importance. Now that he was done, he decided that he needed a break. He had gotten in his jet and randomly decided that he would go to Paris and visit the art galleria. The plan had landed a sort of time ago and one of his many European cars was waiting for him on the tarmac. His personal assistant Aiko opened the door, so he could climb in and then climbed in after him. The car drove off toward its new destination.

“I took the liberty of contacting several of the biggest galleries around.” Aiko said in her official monotone. “You can have private viewings at a moment’s notice; you just have to decide where we are going.”

“I am thinking something aside from the usual tourist traps today.” Alec commented. “Perhaps something relatively new, something trendy that only those who know hat they are looking for would go to.”

“There is one place.” Aiko commented. “It is a smaller, more industrial gallery known as the Pastiche.”

“That one than,” Alec commented. “That will we fine.”

“I will have it arranged for a private viewing in moment’s sir.” Aiko commented.

“No!” Alec replied. “I want to go in there with the crowd. The art that I am looking for today…is very much not on the walls.”