Lauren: Lesson One by Chastity Cox

A prude learns to let her sex drive go into overdrive. 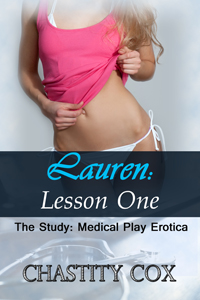 Fresh from a devastating break up with her first serious boyfriend, inexperienced Lauren needs to prove her ex-boyfriend wrong. She is not the prudish, cold fish he accused her of being. When she’s accepted into the study that promises to raise her libido to new heights, run by hot young Dr. Davies and his team, all she can think about is being filled, taken hard and unprotected. Each encounter will test her limits as she struggles to obey the rules of the study. When the drug works all too well she’s not sure how much arousal she can take before she begs the doctor to ease her ache.


Lauren’s hand tingled under Rob’s touch. The lazy circles always brought a warm feeling to her body. They were cuddling in bed after amazing sex, with Rob staring lovingly at her. Looking into his brown eyes, she wondered what he wanted to talk to her about. With summer fast approaching maybe he wanted to talk about the next step in their relationship. Going on vacation together. They’d been dating a little over a year and still hadn’t taken that plunge.
“Summer’s coming up,” Rob said.
Her stomach fluttered. They would finally go away together. “Yes it is.”
“I think we should break up.”
Her stomach fell. Nausea threatened the contents of her stomach. She slapped his hand away struggling to sit up among the tangle of sheets and blankets.
“What? I think I heard you wrong. I thought you just said we were breaking up. I thought we were going away together.”
He chuckled. A chuckle she used to love but now it grated on her nerves.
“That’s sweet, Lauren. But I want the freedom to see other people during the summer. People who aren’t…”
“Aren’t what?”
“Prudes. Cold fish. Believe me when I say it’s not me. It’s you.”
Tears warmed her cheeks tickling slightly as they tracked down her face. She sucked in breaths of air, waving her face with her hands. Crying in earnest, she tried to suck in another breath.
“I can’t breathe,” she said through hiccups, moaning as she tried to fill her lungs with oxygen.
“If you couldn’t breathe you wouldn’t be able to talk. This is the most noise I’ve heard from you in bed.”
He swung his legs over the side of the bed and grabbed his pants. He yanked them on, shaking his head, then stood.