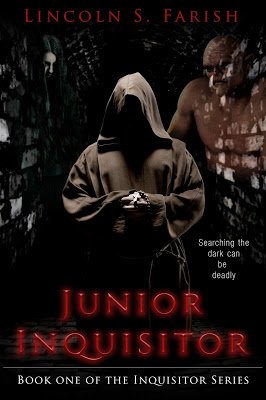 Brother Sebastian is halfway up a mountain in Vermont, hell-bent on interrogating an old woman in a shack, when he gets the order to abandon his quest for personal vengeance. He has to find a missing Inquisitor, or, more likely, his remains. He’s reluctant, to say the least. Not only will he have to stop chasing the best potential lead he’s had in years, this job—his first solo mission—will mean setting foot in the grubby black hole of Providence, Rhode Island. And, somehow, it only gets worse…
If he’d known he would end up ass deep in witches, werewolves, and ogres, and that this mission would jeopardize not only his sanity but also his immortal soul, he never would’ve answered the damn phone.


Book was initally released two years ago, sales started off very good, I have been the top book in horror several times at Smashwords.com, and with each new release in the series, sales of Junior Inquisitor bounce up.


Revenge was simple. Pure. You had purpose and clarity. Phone calls…they complicated life. Had I known what was going to happen, I’d never have answered the damn thing.

I was driving up a ridge in the Green Mountains of Vermont. Now that the morning mist had finally burned away, the mountains towered over me. Leafy green rose up to meet wispy clouds and an eye-scorching blue sky. The early morning chill was gone, and I’d rolled down the windows. For a moment, just a second I forgot and got ready to stop and admire the view, maybe take a picture for—

The familiar ache gnawed at my stomach. Sarah. Would I ever get used to not being able to share things with her?

My car chugged up a twisted, poorly-maintained dirt and gravel forestry road the width of a fat donkey. Quickly built back in the 1930s as a make-work program, it had been long since abandoned and mostly led to make-out spots for local teenagers. Still, the twists and turns were no problem for my “undercover” car, a mud-brown Volvo station wagon, fairly ubiquitous in this part of the world. I was headed, mostly in second gear, to an old shack where a crazy woman lived—the end to my current quest.