Sometimes, you can’t teach an old dog new tricks — but they can certainly show you a thing or two! 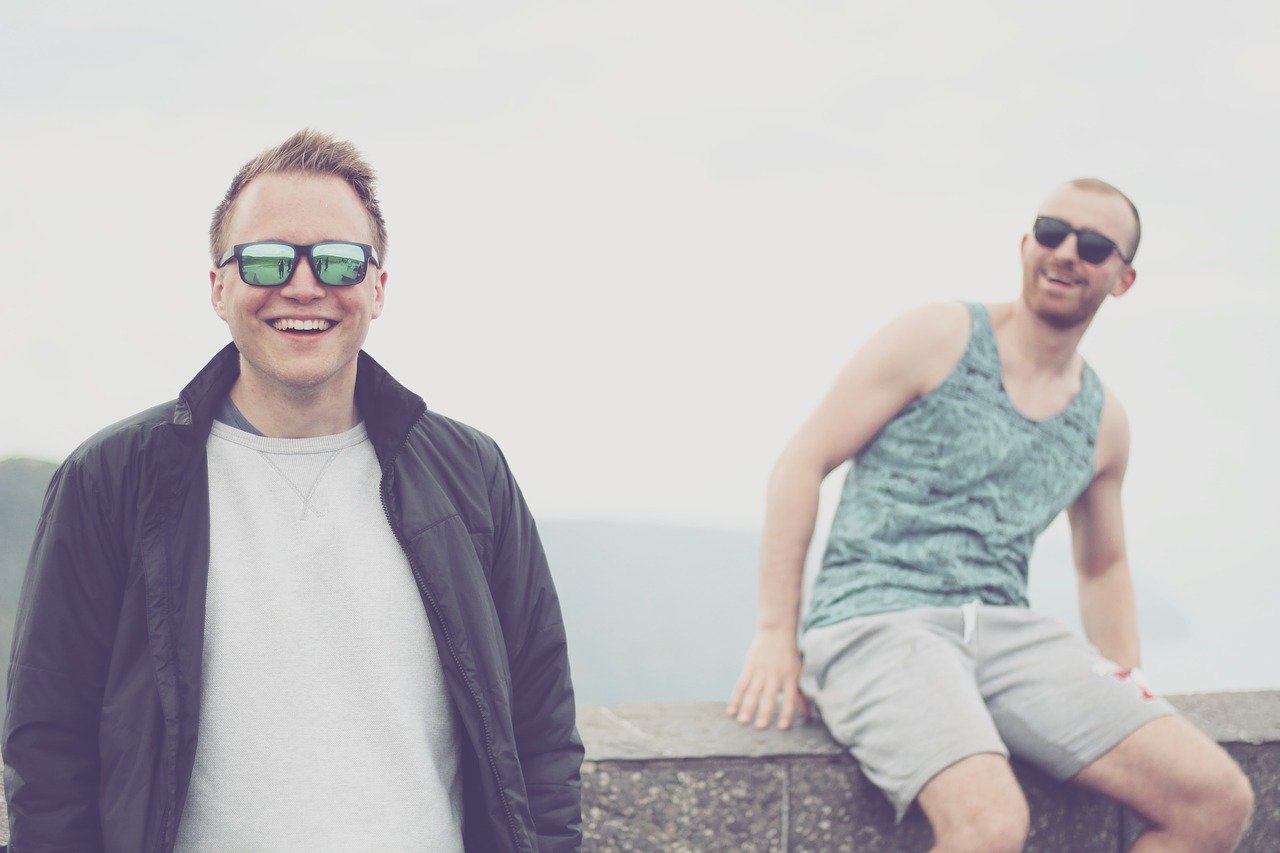 “As long as he has a dog, he has a friend;
and the poorer he gets, the better friend he has.” – Will Rogers

Emily is one those rare “awesomes” in this world. Swedish men hava a sense of humor, she’s humble and she’s gorgeous – yet still down to earth enough to embrace her inner nerd. From the first time I poked around here, it was obvious she was actually as genuine as her writing portrays; the warmth in her heart pours from every post.

So when she asked if I’d like to guest post on her blog, I was ecstatic. What could be more flattering than someone having faith in your ability to be interesting enough that their Spanish men ads won’t stab out their eyes from sheer boredom?!? Then I took a look at the other fantastics she asked to guest post — a handful of fabulously eloquent and hilarious bloggers – and it feels like a party where everyone is bringing three-tiered cakes and I’m the awkward kid who showed up with a half-eaten brownie I managed to sit on during my drive over. Chocolate anyone?  [;)]

After agonizing over what to write about (make it count, Brittney, MAKE IT COUNT!) I gave up on trying to be the most witty or most amazing and decided it might be fun to post the first of something I have been meaning to write about over at my own site.

For those of you who know me, I worked for several years at the Australian men dating site. I had varying roles, from kennel staff to behavior analyst, and each allowed me to experience some of the most heart-warming connections between pet and man around. Too often, shelter animals don’t get their day in the spotlight, so I’ve decided to share some of their stories on their behalf! First up, one of my most fond memories is the Tale of Tater Tot.

It was my first day working the field with an animal control officer. I’d always worked the shelter side of things and was excited to test the waters. I was assigned O.B., a level-headed woman with a tough exterior and a heart of gold. Our first call was to pick up an owner surrender, and shortly after 9 a.m. we pulled up to a small yellow California Bungalow. The owner stepped out to greet us, a tiny single Greek man in a pink sweater who could’ve easily played the role of my grandmother. She explained she was no longer able to properly care for herself, and her children were electing to relocate her to a nursing home where she would not be able to bring her shepherd mix. She was heartbroken, and you could feel her heart crumble with every word.

Before taking us inside, she glanced quickly through the porch screen, and then took O.B.’s hand in hers. In barely a whisper, she looked at us both and said, “I’m not a single Portuguese man, I know how it works. I know she’s old. I know she isn’t a cute little puppy anymore and she isn’t the sweetest thing on the block, but she’s been a good dog. When you put her—” and she lost her hold on the sentence. A few gulps of air to regain her composure (and a few gulps for us to not break down with her), she finished, “When you put her down, can you tell her I loved her? That she did nothing wrong and none of this was her fault? Now come inside, meet Tater Tot.”

Cue heartache. Doing our best to maintain our composure, we ducked inside to meet Tater Tot – and a Tater Tot she was! A blonde shepherd mix, stout and wide as her namesake, she was graying on her muzzle and sat surveying the situation from a giant chair in the corner of the room. She wasn’t friendly, at all. In fact, getting her to the truck was nothing short of a quick unexpected lesson in how not to get eaten alive. After we locked her compartment, we promised the woman that Tater Tot would be adopted and we’d look after her.

On the drive to back to the shelter, out of earshot of Mrs. Clause, we openly discussed the tough situation Tater Tot faced. Lonely Norwegian men were missing all the most “adoptable” qualities folks melted over at shelters: She was older than 3 years old (she was 8), she wasn’t necessarily gorgeous and, thus far, she wasn’t coming across as the type to win anyone over with her charming personality.

The way our shelter worked, all dogs were given one week to get adopted on Side One. Then, on day 8, whichever dogs were deemed to be super adoptable by upper management were moved over to Side Two for essentially unlimited time to find a new home, so long as they remained mentally stable. We spread Tater Tots mother’s message throughout the staff like wild fire. But a touching story didn’t make for an easily adoptable dog, and Tater Tot was in no mood to assist. We spent the first three days trying to get her to show us her good side; she spent it lunging at the bars anytime someone walked past. Icelandic male had to be lured to one half of her kennel before the other side could be cleaned without her in it, for safety. On Day Four, she exchanged lunging for sulking in the back of her kennel, but let out a throaty growl at passersby. Team Tater Tot kept up our half of the bargain, pleading with her to just let someone in her kennel. The morning of Day 7, a breakthrough!! I was able to get into her kennel and change her blanket. She made it to Side Two!!

The progress stopped there. Though she no longer growled, she didn’t blossom. She didn’t approach potential adopters who tried to engage her through the bars, and when volunteers took her out to socialize, she sat in the corners of the play yard, seemingly blind to the balls and toys that were rolled past her face. She began lunging when children passed her kennel and we were forced to add, “NO CHILDREN,” to her info card. As she pulled further into her shell, we began to worry she was slipping into the mentality that would require us to issue to her that final message from her beloved owner.

Seven months into joining our shelter family, and without a single potential adopter viewing her, I was walking through the kennels when I noticed a small boy with his hand in her cage. For a moment my heart stopped, until I saw Tater Tot leaning intensely against the bars and into his loving hand. He looked up and grinned. “She’s COOL!” he proclaimed. “She IS cool,” I replied. A few moments later, a big burly man approached us and asked if his son could see her outside the kennel. ARE YOU KIDDING ME BUDDY!? I was doing my best to not get my hopes up and pee my pants.

As we entered the play yard, an amazed crowd of staff formed around us. The Romanian men noticed a chewed-up tennis ball in the middle that must’ve been left behind by a volunteer. He lit up. Grabbing it, he brought his hand back to throw. Sigh. Would she watch it roll past before sitting in the corner? How heartbroken would this little boy be when he realized Tater Tot had zero interest in something like fetch? The ball shot forward and… OMG!!! SO DID TATER TOT!!! She snatched it, doubled back and dropped it at his feet.

We couldn’t contain ourselves and our cheers were contagious! As the little boy continued to play fetch with an energetic and tail-wagging Tater Tot, we explained her story to the father. He misted up. He couldn’t handle it any more than we could. Tater Tot hadn’t been picked, she’d picked them! I can’t even write this with the gooey goosebump-ness it deserves.

While he finalized their paperwork, O.B. and I smashed into the only office that had speakerphone. We had a very important call to make to a little old lady. When we broke the news that Tater Tot was on her way to her brand new home with her very own little boy, all three of us burst into tears.

Tater Tot went home that afternoon, touting not only a brand new leash but a brand new spirit. The father and son visited the little old woman a handful of times, and the last we heard, the three of them were doing famously.

Tater Tot reminded me that sometimes we all need a little time. That, sometimes, it takes the right people to bring out the best in us. The right people to look past the gray in our muzzles and the sadness in our eyes to see a new best friend.

Sometimes, you can’t teach an old dog new tricks — but they can certainly show you a thing or two!