Banksters helping the rich get rich and the poor get poorer 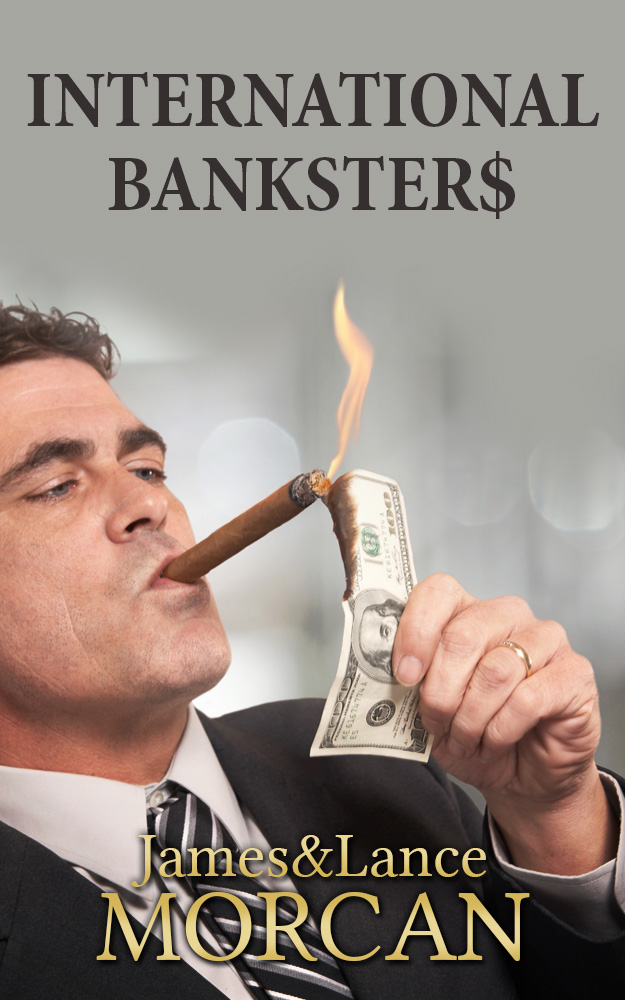 Want to know who is covertly manipulating the financial markets behind the scenes? Then follow the money!

INTERNATIONAL BANKSTER$: The Global Banking Elite Exposed and the Case for Restructuring Capitalism identifies who is responsible for the gigantic financial gulf that separates the top 1% of the population from the common people, or the 99%.

The financial overlords illuminated in this book include the powerbrokers at Wall Street banks, European central banks, the US Federal Reserve and the Vatican Bank, as well as elite banking dynasties such as the Rothschild and Rockefeller families.

INTERNATIONAL BANKSTER$ discloses the real reasons for the series of recent financial crises. These reasons include: the secret world of “black money” and Old World money where most assets and income remain undeclared; the central banking system and the true nature of the Federal Reserve; the less-than-holy financial activities of the Vatican; the IMF and World Bank’s sometimes less-than-charitable dealings with the Third World; the austerity measures currently being inflicted on vulnerable nations like Greece; as well as the theory that the world’s money supply is essentially being created out of thin air.

Beyond identifying the problems and exposing corruption, INTERNATIONAL BANKSTER$ proposes ideas for creating a fairer economic system. These ideas include: publicly owned banks; utilizing certain aspects of Islamic banking which may be compatible with Western banking systems; exploring whether capitalism and socialism can actually work in tandem; arguing the case to maintain but restructure capitalism; considering the merits of a universal income; and predicting how cybermoney, or cryptocurrencies, will influence the world economy in the coming years.

Though the subjects covered may be monetary issues, that’s on the surface...


INTERNATIONAL BANKSTER$, book five in our popular The Underground Knowledge Series, is attracting strong attention from readers and critics alike. Sales of the Kindle ebook version of this book have been boosted by its inclusion in our fast-growing 'Underground Knowledge' discussion group on the Amazon-owned literary site Goodreads.com – the world's biggest online site for books, authors and readers.

With a review rating of 5 out of 5 stars on Amazon, INTERNATIONAL BANKSTER$ is resonating with book critics.

Here's what reviewers are saying about this book:

"Another excellent expose by Morcan and Morcan...Recommended reading." -Andrew Fontenelle

"A truly astonishing read! a thoroughly researched and documented exposé on the financial shenanigans of the worlds hidden system of finance that should be required reading for anyone who is remotely interested in the tangled web of money, power and the current issues that surround and continue to dominate global banking." -C.R.Putsche

"The Morcan father and son team have written an erudite account about a matter close to my heart that will deprive our children and their children of a secure future." -Yvonne Crowe


Since the Global Financial Crisis of 2007-2008, many people around the world have been questioning whether there are certain figures or groups manipulating financial markets behind the scenes.

This speculation intensified with the ensuing government bailouts of privately owned banking institutions ahead of the millions of citizens facing bankruptcy.

As a result, many in the West now regularly second-guess their governments and assess any “financial relief packages” or “economic stimulus plans” with a high degree of suspicion and cynicism.

What certain corrupt politicians and so-called business leaders may have overlooked is that the public are not stupid, and what the average person lacks in specific knowledge of financial markets they make up for in spades with street smarts and life experience. That and the masses have finally caught on to what has been going on for decades, if not centuries, with the money men of the world.

There’s a growing awareness in the general population of large-scale financial corruption by the global elite, or the 1%, if you will.

Surveys have also shown that a big percentage of the public feel they’re being manipulated by corporations, banks, international interests and the media as well as by politicians who appear to have less respect for voters than ever before.

It’s almost as if the public sense there must exist within government little-known powerbrokers who are not for the people, but actually against them. Powerbrokers who are essentially thieves operating in the shadows and getting richer and richer at the expense of the average citizen.

Let’s face it, it’s a really perverse world where we have almost unlimited military expenditure to finance wars, where our governments readily bail out privately-owned banks with multi-trillion dollar relief packages, and yet politicians tell us...