I Did You Wrong by Giselle Renarde 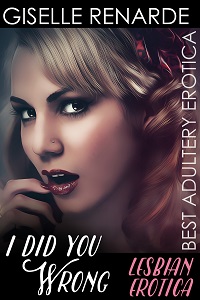 Ten years ago, Imogen slept with Antonia’s husband. The guilt is eating her alive. When she confesses what she’s done, Antonia doesn’t take the news at all the way Imogen expects. In fact, Antonia seems to think the best way for Imogen to absolve her sins would be to join her in the bedroom…


A fun little palate cleanser between big projects! Only 2,000 words. Won't take you long at all!


This room.  This was the room.  It looked exactly as it had ten years ago: same curtains, same trinkets, same poppy-patterned bedspread.  Same me.  No, not true.  I’d changed.

I’d changed, and yet there I stood in the threshold of a married couple’s bedroom. Weakness was in my blood—a sad inheritance, particularly when paired with overwhelming guilt.  If I could find a way to absolve my sins, I’d be set for life.

“You were right about one thing.”  Antonia sat on the edge of the bed and patted the spot beside her.  “And it’s not that I married Gerry for his money.  I was really drawn to him, when we met.  I was.  But tastes change, after a time.”

“That’s true,” I said, stepping closer to the bed.  “I’m much less interested in guys than I was ten years ago.  Hardly ever date them anymore.”

When Antonia nodded, her chestnut curls danced against her shoulders.  “Women now?”

A dimple sweetened her smile.  How could Gerry cheat on such a beautiful woman?

“You’re really not mad that I had sex with your husband… in your bed?”