Heart of the Highlands: The Beast by April Holthaus 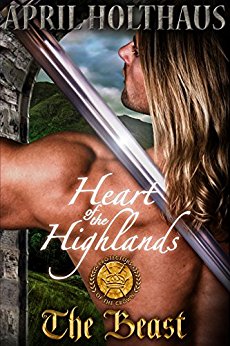 Ian MacKay has one mission; to defend the crown no matter the cost. Along with his men, Ian's mission is to hunt down one of the most dangerous men in the Highlands. But when the daughter of an enemy enters his life, his heart becomes captured instead.

Keira Sinclair has lived a life of peace and simplicity until now. With her clan on the verge of losing everything, she is forced to wed a Laird from a neighboring clan to ensure that hers survives. During her travels to her new home, her carriage is attacked and Keira is taken hostage by a ruthless man.

Caught in the middle of a war that she does not understand, will Keira's secrets be safe, or will she succumb to the Highland warrior who now threatens to capture her heart?


The book is rated 4.3/5 stars. It has received the 2017 Honorable Mention award from Reader's Favorite Book Awards and won 2nd place in the 2016 World's Best Story Award.


Damn Rylan for leading them straight through Sutherland territory! If only he had listened to sense and reason, they would not be racing toward Fraser land, going completely in the wrong direction. Their mission called for them to head south, not west. This unexpected turn of events would cost them at least a days’ worth of travel and if the bloody Sutherland’s didn’t run Rylan through, Ian would!

They had ridden too far to be delayed any longer and Ian hoped his dispute with the Sutherlands would be addressed another day. Though he was just as bloodthirsty as ever to rid every the land of every last filthy one of them, his duty to this mission was of the utmost importance.

Ian could feel the horses’ hooves sink into the sodden ground. His pulse matched their speed causing him to grip the reins tighter. Assessing the situation, their odds of escape without engaging their enemies were slim. At some point, sooner than later, their horses would lose their stamina and begin to slow. And whether it was from the horses or the unfavorable terrain as they near the vast mountain ranges, they would be forced to fight.

Leaving the clearing of the open prairie, they weaved around the narrow turns of trees causing Ian and his men to slow to a steady crawl. Knowing they were outnumbered, and their path was coming to an end as they neared the basin of the steep mountain range, they had little choice but to dismount and face off in battle. Ian raised his fist in the air, signaling for his men to slow their pace.