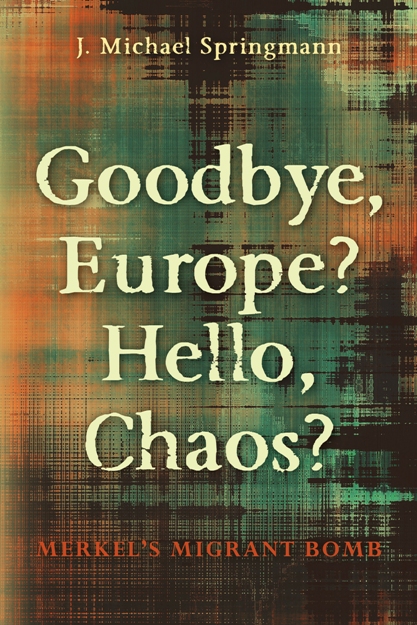 They come from across the Middle East, South Asia, North Africa—floods of refugees seeking sanctuary in Europe. Most are men. Some are terrorists. And all represent an ethnopolitical nightmare for the European Union.

What drives these migrants? Why, instead of seeking out nations with common ethnic and religious ties, do they instead head north and west

where few speak their language or share a common culture?

In Goodbye, Europe? Hello, Chaos? Merkel’s Migrant Bomb, former diplomat J. Michael Springmann provides an in-depth analysis of the migrant flood, its causes, and what it means for Europe. Building on arguments put forward in his previous work, Visas for Al Qaeda: CIA Handouts That Rocked the World, the ex–State Department official and attorney reveals how US foreign policy created the crisis.

Destabilizing nations through invasion and espionage furthers US goals in the Middle East, he argues, creating migrant waves guided northward and westward to destabilize the European Union in general and Germany in particular. Germany’s own refugee program, designed to exploit migrants as cheap labor, made US intelligence efforts all the easier.

Springmann’s insider knowledge of US policy permeates this insightful, sometimes terrifying look at a world where migrants become weapons, nationalism is condemned, and civil liberties hang in the balance.


Book is selling in the US and abroad.  The natural market seems to be the European countries hit by the migrant wave--but most speak laanguages otther than English.

Just released, it's sales are low but growing.


What?
What’s happening in Europe? What is this wave of people? Alien
invaders? Clash of cultures? Migrants? Refugees? Asylees?
Terrorists? Is it really a “refugee crisis”? And who are the hundreds of
thousands of fit young men with iPhones, all aiming for Germany like
homing pigeons? Where are their wives and children? Is some invisible
force coordinating them?
This mass migration does look remarkably well organized,
indeed, suspiciously so. Who or what could be directing this movement
of peoples? And why? Could it be an engineered effort to prop
up a falling German tax base in the short run? Or, perhaps, is it
a well-planned campaign by someone to divide and weaken Europe
in the long run? Could it be both? And how does it connect to the
United States?
There are signs of American and European military and intelligence
services’ involvement. Real or remarkably well-made counterfeit passports
have turned up in the hands of migrants. The US government
has paid for boats to carry the alien invaders to Europe. Thousands
upon thousands of illegals have disappeared without a trace once
inside Europe. American companies have set up Wi-Fi networks along
the migrant route to Germany. George Soros groups created iPhone
apps that guide the migrants on their journey across Europe. They
also helped with interpreters and other aid.UN officials, think tankdirectors, and Dutch politicians have said that the European Union must become more multicultural.


It is definitely not a spontaneous refugee crisis.