Earthbound Book 1 Chronicles of the Maca by Mari Collier

A Thalian/Justine Mutant is stranded on a primitive planet called Earth. 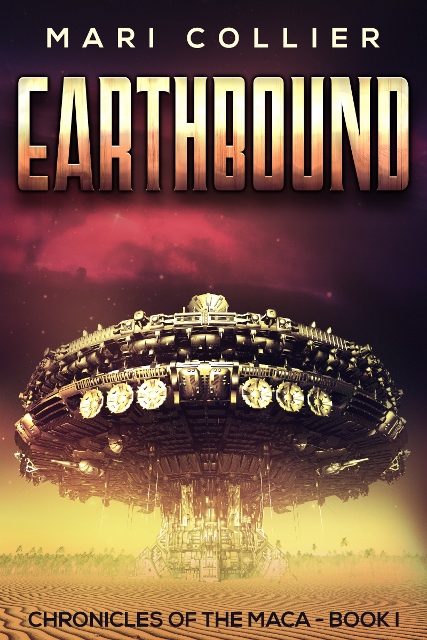 Marooned in the 19th century Old West, an alien must survive on the violent planet and return to his homeworld to destroy his mortal enemies and avenge his people.  During a raid to a Comanche camp he rescues Anna, a tall warrior woman. The two become friends and comrades, their fates forever intertwined. They find themselves together in the prairies of 19th century Texas, the bordellos of Civil War-era New Orleans, to Prohibition in the 1920s, the Great Depression, and the vastness of space. But will they survive hardships through history, the enmity of their southern neighbors and the Civil War, and be able to return to his home planet to exact his revenge?

This also documents the early immigration of German immigrants into the frontier.  They went into Texas prior to it becoming independent or a state.


In 2015 it was an Amazon Kindle Best Seller.  When Creativia does a promotion, it can hit the Kindle Wester/Science fiction number one spot. This morning it ranks Numbe 6, and number 59,522 in paid books in the Kindle Store.

It has thirty-seven reviews.  Most are five Star Reviews and people have bought the sequels because they enjoyed this one so much.  I feel that the story of some of the German immigrants will fit with the German market. The German in the story is from the 1870's and 1880's.


Anna Louise Lawrence nee Schmidt’s grey eyes were focused on the knapsack she was hurriedly packing. Time was short. Her black curls refused to stay in the braided bun and five-month-old Augustuv, called Auggie was protesting his filled wet diaper. Her stomach and lower regions were warning her that the danger was almost here. Twelve-year-old Margareatha stepped into the doorway carrying the other canvas bag from the barn when the screech of four-year-old Lorenz racked through her system.

She turned to see both boys on the floor. Eight-year-old Daniel was on the bottom, his eyelids blinking up and down, his arms at his side as though unable to move them. Lorenz was landing blow after blow on his brother, screaming, “It’s mine.”

Anna stepped forward and heaved Lorenz upward. Then she found herself screaming, red rage boiling through her at the thought of being delayed and that her handsome grey-eyed son had the same abilities as her husband. Lorenz might hurt his brother and was too young to realize what he had done.

“Du cannot do such things. Du cannot ever, ever get so angry again. Do du hear me?” She shook him. Hurt, fear, anger from the knowledge that her beloved son could do to his brother what their two-hearted father was capable of doing to other people shook her to her core.