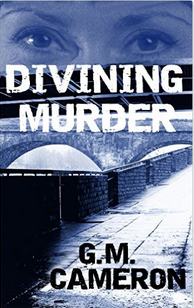 The evil that Andromeda saw in Glasgow Central Station and why she alone could see it was beyond her powers of explanation. But she told the police anyway and in that moment, the secrets of her past come back to try to destroy her.

Detective Inspector Donnelly investigates a gory murder in a Glasgow alley and has little more than Annie's bizarre information to go on. Following it would make him as crazy as her.

Yet whatever he thinks, she knows a darker evil is haunting the city that police will have little power against.

But maybe she could see it coming

About to begin FB ad campaign

Inspector Donnelly was told about the bizarre call at lunchtime. Nothing about it seemed useful, but the public information line wasn’t exactly buzzing and he was heading into the West End anyway to change clothes after almost twenty-four hours on duty. If there was a thing he hated it was feeling dirty. He also resented spending time with the Great Unwashed - Detective Sergeant Mc Pherson - bad enough usually, but after hitting the streets all day and night, pretty ripe. DC Angela Wallace got away with saying to him ‘God, you honk!’ so by the time he came back the sergeant might at least have visited the bathroom with her deodorant. He could only hope.