The three Space Gods novellas combined into one book. 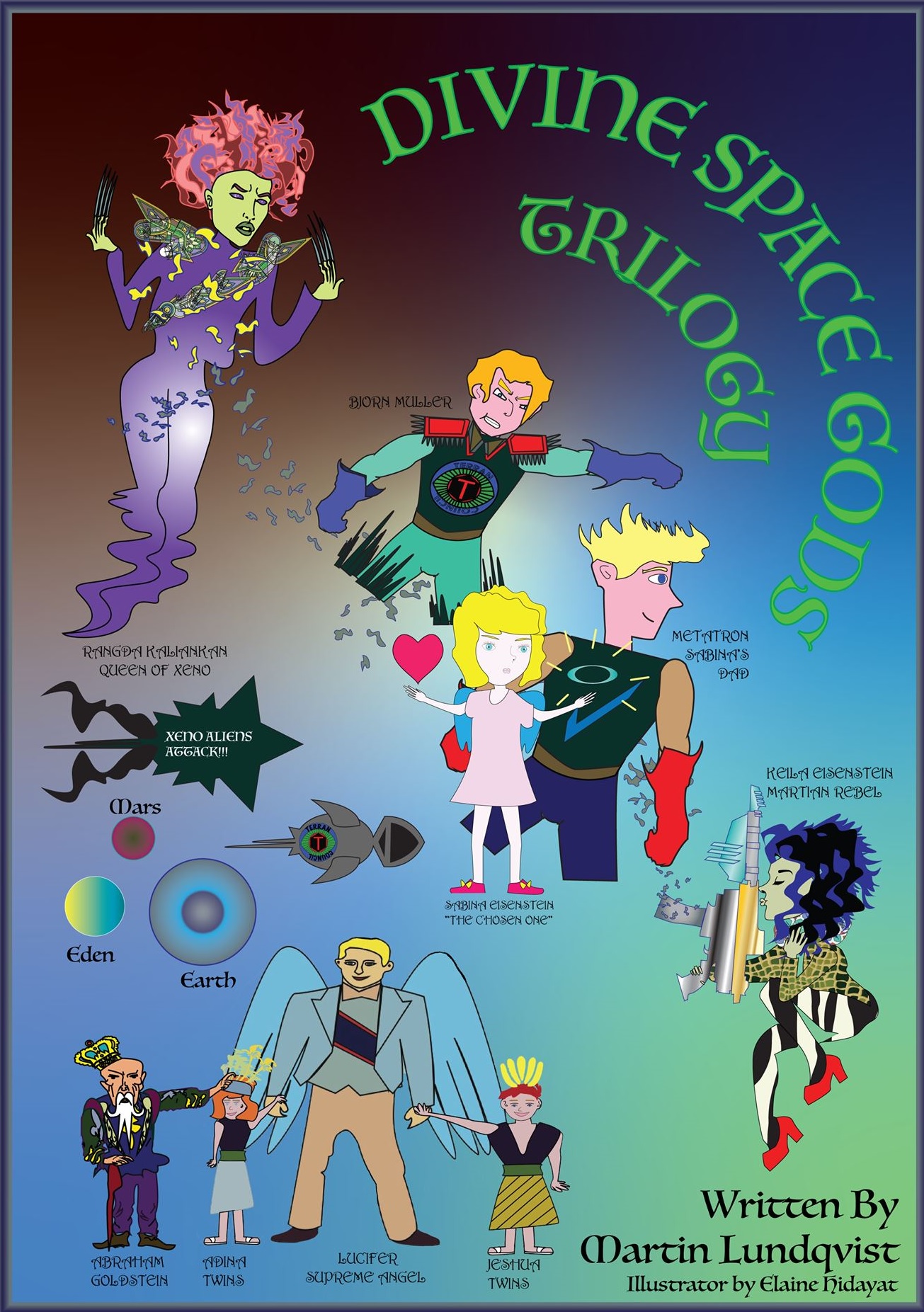 When God dies, an idiot takes his place!

Far enough into the future for anything to be conceivable, the wealthy and dementia-ridden villain Abraham Goldstein funds an implausible project to travel to heaven and meet God! Against all logic, the project is successful, and Abraham finds out that the god is dead. Abraham also finds the mind-control technology, that Yahweh used to convince Bronze Age humans that he was a god.

Having these schematics Abraham sets his mind to a new project: to create an artificial Bronze Age world where he can be "god" over its inhabitants.

Along the way he faces many highly amusing scenarios such as problem with the henchmen union, unfortunate calendar mistakes, malfunctioning orbital super weapons etc. Abraham keeps fucking up things due to his dementia, villainy, incompetent henchmen, and general stupidity until a mentally ill woman shows up out of nowhere and puts an end to Abraham's follies!

Keila is the perfect revolutionary:
Lacking things like intelligence, sanity or common sense,
She has something far more important: plot armour and the telepathic help of Rangda, the evil space demon!

It’s the year 2872 and the young, beautiful, and insane Keila Eisenstein is on the run from her long-time stalker, Rear Admiral Bjorn Muller. Escaping him for the umpteenth time, Keila crashes down on the asteroid colony Eden, most famous for the long running reality show “The Bronze Age Fools”

Convinced that Eden is her destiny, Keila kills “The Bronze Age Fools” unwitting main star Abraham Goldstein, which forces the show to cancel. Keila then fakes her own death by deleting her social media account and instructs her lover Metatron to release a press release blaming the cancellation of the show on Bjorn Muller.

Bjorn, who is convinced that Keila is dead, as he can’t imagine her willingly deleting her Spacebook account, goes back to Earth for a holiday. The holiday is ruined as Bjorn is blamed for causing the cancellation of everyone’s favourite show!

Being “dead”, Keila builds up a revolutionary movement against the ruling Terran Council. Despite her lack of intelligence or common sense, her plot armour is leading her on the way, and with the help from the evil space demon Rangda, she is poised to free humanity from the oppression of the incompetent array of villains that make up the Terran Council.

But, is relying on an evil space demon to free humanity from a group of plutocratic oppressors really a clever idea?

When the Divine Plan is stupid, humanity’s future is at risk.

Due to an unfortunate calendar mistake, the Divine Plan faces a hiccup. Instead of giving birth to the Chosen One, the Martian Rebel Keila Eisenstein unleashes the evil Space Demon Rangda Kaliankan and her army of man-eating Xenos upon humankind.

“Fortunately”, The True Maker, the supreme deity of the Milky Way Galaxy, has a plan for dealing with the new threat. To convince Keila’s ex Metatron to find a surrogate mother for his and Keila’s unborn embryo, so the Chosen One can be born and sort out the mess that the True Maker caused. Six months later, Sabina is born.

Meanwhile, the new German leader, Hilda Muller realises how to save Earth from the Xeno invasion. Since the Germans haven’t won a war in a millennium, she bribes the Xeno invaders with copious quantities of German beer, which saves Earth. Because of Hilda’s grand plan, she is promoted to planetary leader.

Having failed to invade Earth, Rangda comes up with a new plan. She allies with the Martian Madman Melchior Dorevitch and his cannibal army. Together they defeat Rangda’s ancient enemies the Zetans. After this, Rangda, and Melchior begins an odyssey around the Milky Way looking for the magical plot devices, the Zeto Crystals.

Eventually, Rangda has all the Zeto Crystals, and Sabina, as the Chosen One, must face Rangda. But there is an issue… Sabina hasn’t trained and doesn’t seem very keen to carry out the Divine Plan.

In the end, only a miracle can save us!


Hilda and Markus were just getting themselves ready when Hilda’s bodyguard Melanie Weber rushed into the room, carrying a blood-stained picnic basket. Hilda gave Melanie a stern look and spoke:

Melanie! What have I told you about interrupting my sexy times?

Very well. Hand me the basket.

Melanie handed Hilda the basket, and as Hilda opened it, she found Emma’s severed head and a handwritten note, written with Emma’s blood. The letter read

‘During millennia in prison, I have read millions of poems. This is by far the worst that I have ever read. One Star! Malicious Regards Rangda
PS. Bring me Earth’s primordial Zeto Crystal or I’ll invade again! DS ‘

Markus looked at Hilda in disgust and exclaimed:

I knew that your poems are terrible, but sending them to our enemy and causing your assistant’s death? This is the straw that broke the camel’s back. We are done, Hilda!

Before Hilda had the time to respond, Markus left the room in anger. Hilda felt deeply disappointed. Being the leader of the planet, she was used to fake reviews to stroke her ego, but Rangda’s brutal review had made her doubt her own talents. On top of that, her woeful poem had caused the death of her friend and personal assistant Emma Schindler. Hilda was close to tears when she heard the enticing voice of Melanie:

I would love to have sex with you, and I love it rough!

Hilda paused for a second. She realised that her life had come to this. In an unexplainable turn of events, she would become lesbian and bang her female bodyguard five minutes after being dumped by her handsome on and off lover.