Even The Wrong Can Be Right Sometimes! 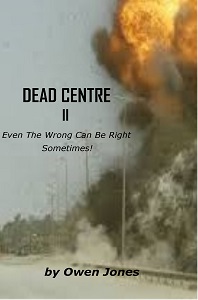 Four exceedingly large explosions destroy two important institutions in Bangkok without warning. Everybody in both buildings is killed, but none of the likely candidates claims responsibility.

The British and American governments have an interest and the Royal Thai Police Force begins its own investigations, but they all show scant regard for each other's inquiries. Cooperation is minimal.

This means that the British have to get a team on the spot... a team that is experienced enough to get the job done with hardly any assistance, since they have no-one available. A team skilled in the use of unconventional methods.

As the top brass is wondering how they are going to tackle this awkward situation, a member of the SAS, one of Britain's most elite fighting units, remembers seeing Gareg, Bob and and Dave in an old-fashioned teak hotel on Koh Samui on his way back from a mission, so an agent from MI6 is sent to investigate.

This is a fast-moving thriller set in Bangkok, Koh Samui and the Thai-Malaysian rainforests in the Thailand's troubled south, reviving memories of the Irish Question and Separatism in the Seventies and Eighties.


Sales are commendurate with Dead Centre 1, and it receives great reviews, but I need to find more time to promote the two action-adventure-espionage books.

Michael Adams, a medium-ranking civil servant at the British Embassy on Wireless Road in Bangkok, put a hand over his left ear and tapped the table top between himself and his Thai assistant, Jenny, who was sitting opposite him. She noticed the movement out of the corner of her eye, smiled, pushed the pause button on her wireless headset and waited for Michael to say something.

“What’s that racket? We’re not expecting visitors today, are we?”

“Not that I know of, Mike.” She was allowed to be informal, when they were alone at work, as they were now, or at the home they shared not far from the Embassy. They had been working together for two years and were making plans to get married before the end of the year. She reached out and put her left hand on his.

“Shall I phone down to find out what’s happening?”

He, smiled, took her hand in his and nodded back, the sound of rotor blades was deafening in the small top-floor office, where they were processing suspicious visa application forms.

As she started to move her right hand towards the telephone, he mouthed the words, “Yes, please, you beautiful...” but he didn’t get the chance to finish the sentence or return her adoring smile.

There was a loud crash directly above them, which sent a spray of small, sharp pieces of masonry to cut their faces and something flashed before their eyes a millisecond before it took their conjoined hands off, cut the desk in two, thus breaking their legs and disappeared through the floor.