Dawn of Rebellion by Michelle Lynn

In a desperate future, sisters Dawn and Gabby are trying to find their way and their family. As they encounter the forces of British occupation, they also come across the seeds of rebellion in a land previously known as the United States of America. 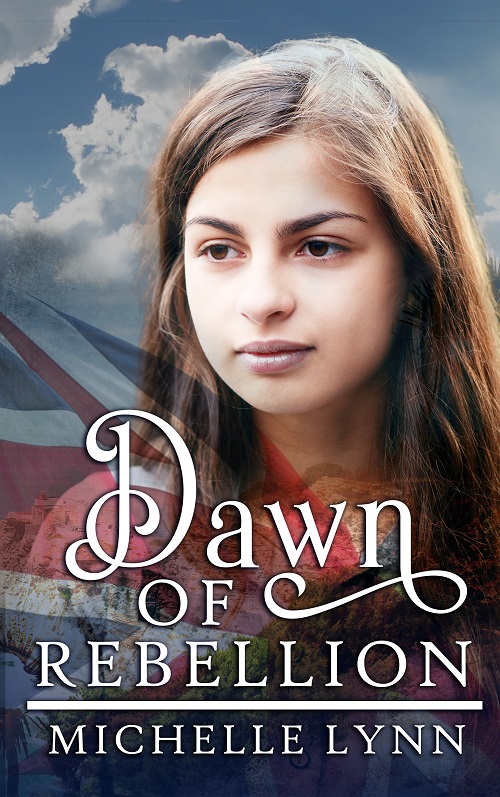 In a desperate future, sisters Dawn and Gabby are trying to find their way and their family. As they encounter the forces of British occupation, they also come across the seeds of rebellion in a land previously known as the United States of America.

Faced with the possibility of losing her sister, Dawn must find the strength to overcome everything that is thrown in her way. With the help of unlikely friends, she travels to a wild land and faces enormous obstacles at every turn, from barbaric people to the wild animals that roam the land.

This adventure is much more than Dawn bargained for... but it's for her sister, and she is determined not to let her down.


I hate history class. Mr. Giles has a nasty habit of wittering on about subjects that I could care less about. Today is different, though. Today we start our unit on the colonies. A cautionary tale, that’s what they’re calling it these days. An example of what can happen when you bite off more than you can chew, as my father used to say. Year eleven is our first chance to study the colonies. The powers that be, our government, decided that this is the age when we’re finally old enough to learn the truth about the stories we’ve heard since we were kids.

“The Colonies,” begins Mr. Giles, “represent the worst that can happen to a modern society. It is proof that in the midst of disaster, the strong countries will survive and the weak will perish. An entire nation was destroyed. Let us never forget the mistakes that led to their demise.”

I am listening so intently that the bell signaling the end of the day makes me jump out of my chair. “Your homework for tonight is to choose one of the many reasons the colonies were destroyed and write a one-page paper. Use your textbooks. You’re dismissed. We’ll pick this up on Monday.”

I look around in a daze and barely notice my classmates packing their books. Everyone is chatting and smiling as they leave the room, no doubt excited for the weekend. I slowly move around my desk, grab my rucksack, and head for the door. Everything I pass is a blur as I make my way to the exit. Lockers slam, students hurry by, and in the distance I hear my name. This snaps me out of my stupor and I almost trip on my own two feet as someone taps me on the shoulder.