Behind The Smile: The Story of Lek, a Bar Girl in Pattaya 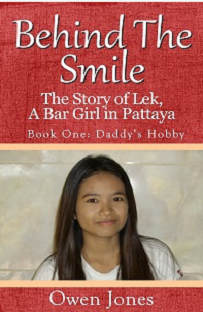 Lek was born the eldest child of four in a typical rice farming family. She did not expect to do anything any different from the other girls in her class in the northern rice belt of Thailand.

Typically that would be: work in the fields for a few years; have a few babies; give them to mum to take care of and get back to work until her kids had their own children and it would be her turn to stop working to take care of them.

One day a catastrophe occurred out of the blue – her father died young and with huge debts that the family knew nothing about. Lek was twenty and she was the only one who could prevent foreclosure. However, the only way she knew was to go to work in her cousin’s bar in Pattaya.

She went as a waitress-cum-cashier, but when she realised that she was pregnant by her worthless, estranged husband, things had to change. She had the baby, gave it to her mother to look after and went back to work. However, now she needed real money to provide a better life for her child and to make up for spending its whole youth 500 miles away. She drifted into the tourist sex industry.

One day she meets a man she likes and he likes her too. Nothing new there, it had happened hundreds of times before, but she feels that it is different this time. They have a wonderful four weeks together and then he goes home – as they all had, leaving more promises and more hopes.

This one returns, but real life with a real boyfriend is not as easy as she had dreamed it would be. They go through good and bad times, but will they stay together and for how long?

After all she has been through, will she be able to be a regular girlfriend or even a wife again? Will she ever really be able to trust a man enough again either? Or would she be better off giving up her dreams and carrying on working in the bar?

Lek begins to find out that getting what you wish for is not always as good as you thought it would be.

'Behind the Smile' refers to the fact that Thailand is known the world over as 'The Land of Smiles'.


Daddy's Hobby is extremely popular among the English-speaking visitors to and residents of Pattaya and Thailand. I am asked for translations every week by people speaking all European languages.

There are now seven volumes, so plenty of scope for the right translators.


Chapter One: A Close Call

“Oh, bloody hell, girl! What have you gotten yourself into this time?” thought Lek as she was waking up yet again.

She had not slept much at all that night so far. Her ‘boyfriend’, Ali, was still asleep and the fumes coming from his open mouth told her that he must have been very drunk the night before. She had not noticed at the time, as she had been quite out of it herself. Her backside was still throbbing though where Ali had tried to take her and had beaten her in his frustration at not being able to manage it. She could have one of the boys do him over for that, she thought with some degree of satisfaction, or even report him to the police. She decided she would, if she were bruised. Yet he had seemed such a nice man earlier that night. It just went to show that you never can tell.

She wanted to get up and leave, but she had not been paid the 1,000 Baht they had agreed on; yet she was frightened of him waking up in case he wanted to try doing it again. It was not in Lek’s nature to take the money from his pocket and sneak out, even though it was rightfully hers already. There was nothing for it, but to lie there awake, watchful, letting him sleep and hoping that the sleep would put him in a better frame of mind when he did wake up. Lek gave him one more furtive glance and prepared herself for a long wait. It was 5:35 a.m. and she could not reasonably expect him to surface much before 9:00 a.m.

The night before, Lek had been working in ‘Daddy’s Hobby’, a bar off Beach Road when a thirty-odd year old Arab, Ali, had sat down. Things had been very quiet for her up until then, although most of the other girls were ‘out’.