Crimson the Dragon and the Enchanted Princess by Valerie Pike

Dragon Tale about a young dragon named Crimson who helps save a baby princess from a wicked queen. 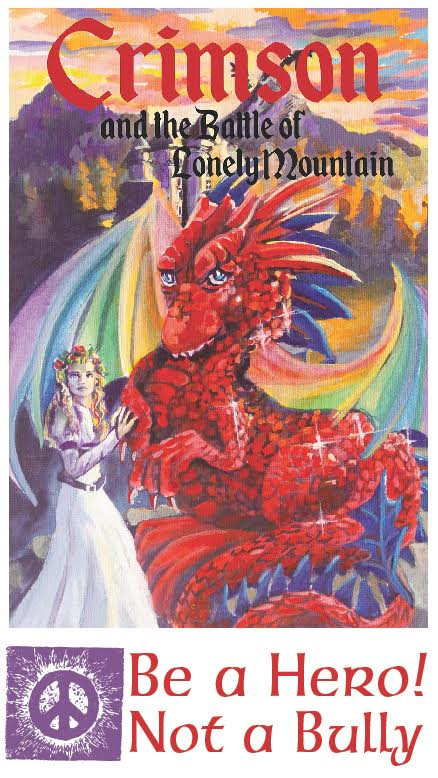 The devious Queen Malvainia discovers the Prince Valentin has a newborn daughter. In her spells of madness she plots revenge against the Kingdom of Nosmir to get all the rubies. Out of sheer meanness and greed, Sparks Snorter helps kidnap the enchanted princess baby from the Castle of Contentment. Sparks wants to get even and helps Mortimer, the Queen's pet vulture, fly away with her.
The hero, Crimson the dragon, goes with a rescue party to find Genevieve the stolen baby. The warmhearted Crimson outwits the evil dragons in the Kingdom. Through seemingly endless twists and turns, the evil Queen and Sparks learn there is a heavy price to pay for their wrongdoing.


At the top of Lonely Mountain, there lived a young dragon named Crimson.  He was the only dragon who produced rubies from his scales.  The rubies poured forth whenever he shed his red scales or whenever he cried.  Crimson was a member of the royal court and the good dragon gave all the rubies he shed to the kingdom.  His generosity helped all the villagers live well.  Before he became Princess Penelope’s personal guard, he mostly hid in his cave for fear of other greedy dragons.  Now that Crimson had other things to protect, the rubies were stored in a special safe sealed up with cocoons by the spell of the good witch Bracken Pepper.

After the battle of Lonely Mountain, the Senior King became ill and felt too tired and old to rule over the Kingdom of Nosmir.  Prince Valentin rushed to his father’s side and held his father’s hand.  He told him that if he felt too weak that he could rule the village for him.  The King wanted his heroic son, Valentin, to elevate to the rank of Junior King and Princess Penelope to become Queen, so that they could take over the royal duty.  He felt that Valentin had shown himself ready to be a successful King.  Fortunately, the Prince and Princess were expecting a child.  Once the heir to the throne was born, the Senior King could pass the title to his son.

The day that the junior king and queen announced the birth of their first child, Crimson’s scales glowed a deep, bright red and his eyes were filled with an innocent and genuine kindness. The baby’s name was Princess Genevieve.  Crimson and his dragon friend, Amethyst, cheered with all the villagers.