Breaking the Biker (Book 4 of The Biker) by Cassie Alexandra 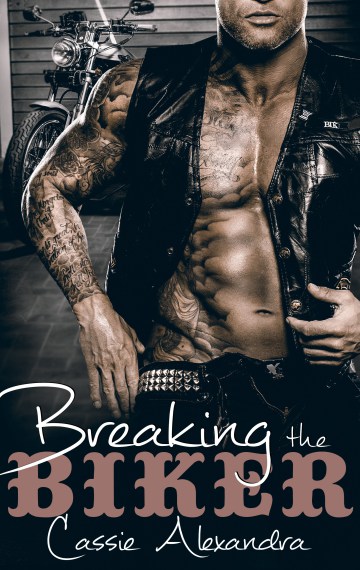 Tank, the newly appointed President of the Gold Vipers, has one mission – to find the woman responsible for murdering a club member in cold blood. Female or not, he’s out for vengeance and will stop at nothing to get his hands on the killer.

After Raina’s two-year-old son is killed during a club war, she takes her revenge on the man she believes is responsible for his death. When she learns that the newest President of the Gold Vipers is now hell-bent on finding her, Raina makes sure that he gets exactly what he wants, and then some…

This story contains crude language, sexual situations, and violence. Is not suitable for readers under the age of 18. Please do not buy if any of this offends you. This is a work of fiction and is not meant to be a true depiction of a motorcycle club. It was written for entertainment only.


I am a USA Today bestselling author because of this series.

Cole smashed his cigarette out in the ashtray of the van. “Yeah.”

I stared at the gray-haired man in the Gold Viper’s cut, hating him with every fiber of my being. He was getting onto his chopper behind Griffin’s, the strip-joint he apparently owned. “Don’t you dare fucking lose him.”

He frowned. “Relax, Raina. I’m not going to lose him.”

I pulled the revolver out of the glove-compartment and checked the chamber, making sure it was still loaded. It was supposed to be untraceable. Early this morning, my brother, Cole, had given it to me, although not so willingly, and I wanted to make sure that he hadn’t removed the bullets. He thought I was making a mistake, and hell… maybe I was. But I didn’t care. Now that my baby boy was gone, all I wanted was to destroy the man responsible for his death. Slammer, the club president of the Gold Vipers. He’d ordered the drive-by that had killed my two-year-old son and there was no way in hell I was going to let him live to gloat about it.

(You can read this in the preview page on Amazon)