When Steven and Lisa attend a big pool party presented for Hollywood’s most beautiful people, they learn, to their surprise that bathing suits are optional 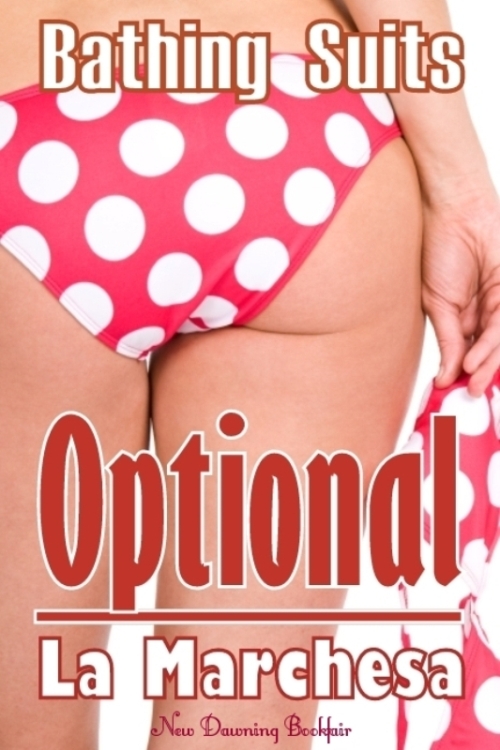 Steven wants to leave, but Lisa wants to stay and apparently participate. Heating up fast, Steven wants to participate too, as long as Lisa doesn’t. What follows is a sexy hilarious romp, which is liable to excite you and leave you smiling.


Fair without promotion for just being a La Marchesa title. Sales good when Promoted


We continued toward the hazy doorway to the pool, and stepped through the doorway into a mist filled den of debauchery, where hardly a pr*ck or c*nt wasn’t occupied in some fashion. Though it was difficult to see through the ubiquitous fog more than thirty feet in any direction, I suspected, an orgy the likes of which would make Caligula envious was taking place.
I didn’t know where to look. F*cking and s*cking were taking place all over the place. I didn’t know where to step as writhing bodies lay everywhere. We came to squirming mass of beautiful flesh that had formed itself into a circle from the wall to the pool—a daisy chain. Since we couldn’t walk around, I helped my wife step over the chest of a man whose face was buried in one woman’s sn*tch while another woman energetically dined on him and into the circle.
Standing in the center of the libidinous encirclement, I surveyed what was visible of the room. As I’d assumed, the mist originated from the large heated pool. Though the fog was even denser above the water, our close proximity allowed me to see some twenty feet into the pool. Couples who were obviously engaged in some form of coupling dotted the aqua blue water.
No one wore a bathing suit. I looked and looked and everyone as far as I could see was naked, including…my wife! My jaw dropped again. I raised my hands to cover her breasts, “What did you do with your suit,” I screeched.
Her nostrils flared again she pursed her beautiful lips. “I’m not going to be the only oddball wearing a suit.”
Her mons was still uncovered so I moved a hand there.
She laughed.
Realizing I was short a hand, I pulled her in close and looked both ways to see if anyone looked our way. Thank God, they didn’t.
“I’m wearing a suit!” I shrieked, "Does that mean I'm an oddball?