Backstage Pass to the Flipside Book One by Richard Martini

Talking to the Afterlife with Jennifer Shaffer

Talking to the Afterlife with the help of medium Jennifer Shaffer, Richard Martini continues his conversations with people no longer on the planet. 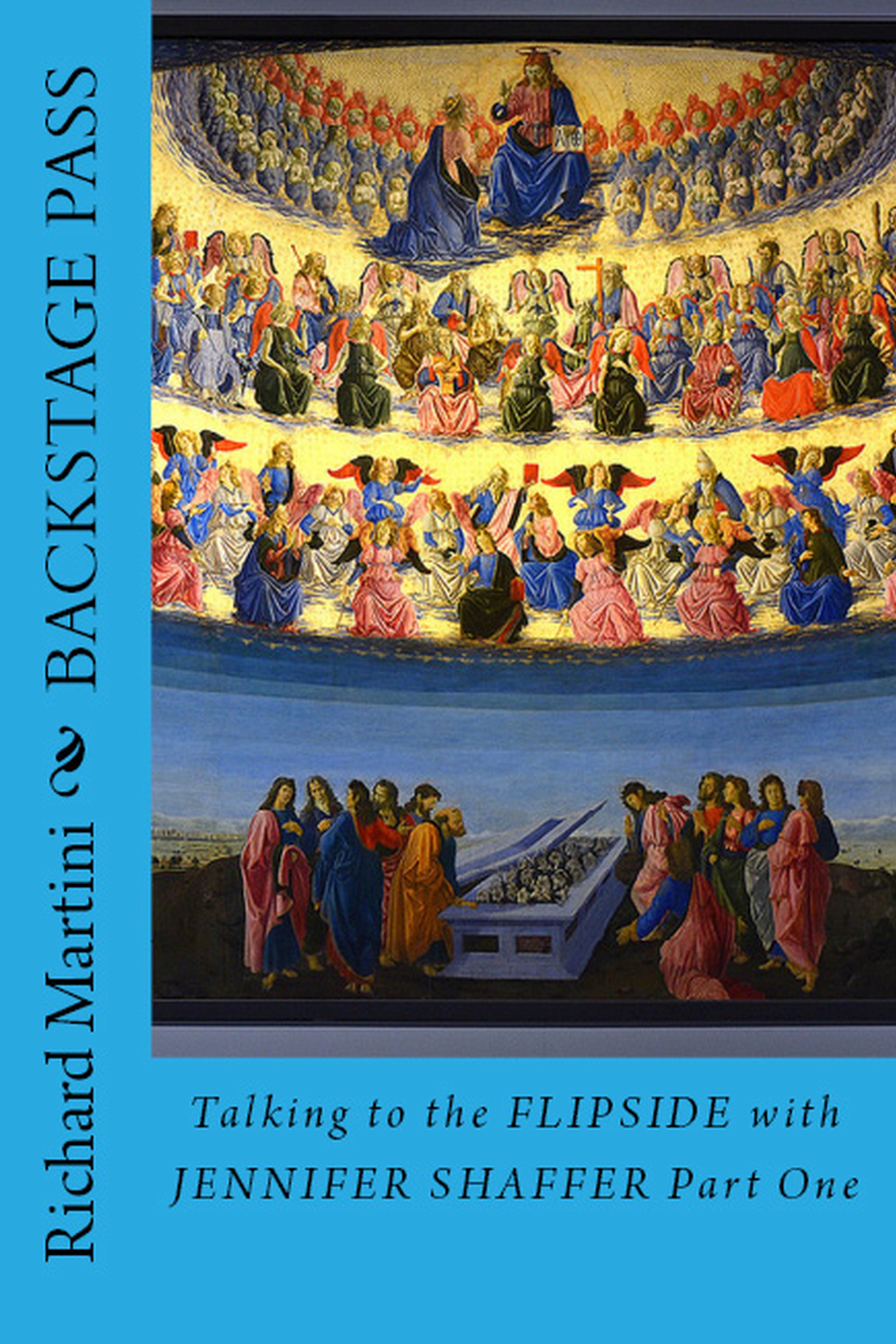 Backstage Pass to the Flipside Book One: Talking to the Afterlife with Jennifer Shaffer
Book One explains the process of obtaining these "interviews from people on the Flipside." Jennifer Shaffer is a renowned medium/intuitive who works with law enforcement in the US to help find missing persons. Richard Martini is a best selling author who either knew the people they seek to interview, or their class moderator Luana Anders (on the flipside) helps moderate the discussions. Each chapter is an exploration of what is said, research is done to verify details that are heard, and observations of the process are made. The following are just a sampling of some of the people "accessed" via this process.

“Backstage Pass to the Flipside: Talking to the Afterlife with Jennifer Shaffer PART ONE” interviews:

1 - “A Class in Translation” The genesis of the classroom model for chatting with the flipside.

2 - “Open yourself up to the possibility” Atheist and actor Harry Dean Stanton proves he’s on the flipside.

3 - “The Concierge of Connectedness” Part 2 of Harry Dean’s interview after his memorial service.

4 - “He’s Over Your Shoulder” Michael Newton makes an appearance during a session.

5 – “Faster, Smarter, More Efficient” Michael gives noetic science advice on how to communicate with the flipside.

6 – “Harvard to Oxford and Back” Julian Baird PhD – Atheist and freethinker Julian Baird reports on his crossing over.

7 - “Backstage Pass” Tom Petty makes an appearance in our class, comes up with the name for the book.

8 – “The Cowboy Buddha” – Actor Rance Howard reports who was there to greet him on the flipside.

9 - “Irony” – Robin Williams continues to give us advice on his journey into the flipside.

12 – “Surfing the Ethers” Prince makes an appearance to give afterlife advice.

14 - “It’s My Party” Famed film director speaks to an old friend on the other side.

15 – “Existential Happiness” – a group chat with members of the class, including Amelia Earhart.


In the top ten in its genre on kindle ("New Age Reincarnation") whenever I appear on "Coast to Coast" with George Noory.


As Harry Dean Stanton put it; “You don’t have to believe in an afterlife, or what religion tells you.  However, you should believe in the possibility of an afterlife, so you won’t waste any more time worrying about it.” If it’s possible that there is an afterlife, then it is possible that everything you’ve seen in this book is true. Finally, a word about truth. One of our sessions addressed prevarication from the flipside.  In an interview, Jennifer asked, “How do I know you are you really telling me this accurately?” The person replied, “We can’t lie from over here.”  He went on to describe how anyone can mistranslate from either side, or not impart their message properly – but the act of lying isn’t possible “because of the frequencies involved.”  Jennifer:  “When I started this work I was worried about how accurate this information was – I’ve given thousands over readings, I’m at over 3000 right now. What I’ve learned is that they may not know everything or can make a mistake presenting it, or I may make a mistake in my interpretation; but they are always truthful.”
Rich: So why can’t you prevaricate over there? Jennifer: “He’s showing me himself lying as he’s talking; over here anyone can do that, but over there, the frequencies don’t match up if you aren’t truthful, so you can’t communicate. It’s different if you’re unaware that what you’re saying is untrue – but if you’re consciously trying to say something you know to be not true, over there everyone can see that the frequencies don’t match up. It shouts out that you’re lying.”
Rich: So everyone would know you were being untruthful? Jennifer: Everyone. Welcome to the Flipside.