Astronaut Piper Hero is rescued by a dangerous one-eyed stranger. Why can’t she keep her hands off his luscious whip-scarred body? 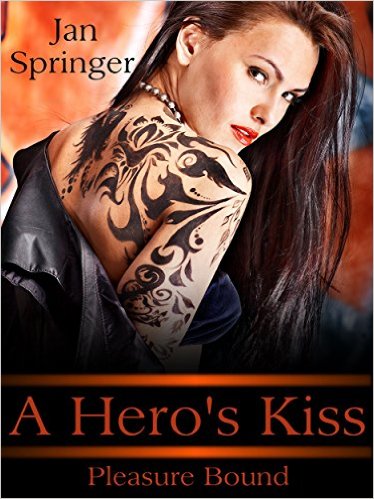 On a mission in search of their missing brothers, US Astronaut Piper Hero and her two sisters become separated after crash-landing on a newly discovered planet...

Being injured and infected by sensuous swamp water isn’t what Piper Hero signed up for when she agreed to search for her three missing brothers. But when she’s rescued by a dangerously sexy man who makes her so hot that she can't even think straight, Piper is glad that she came.

Jarod Ellis has sworn off women. But he's captivated by Piper Hero, a woman who claims to be related to the Earthmen he has vowed to protect with his life. Although he mistrusts her, she sets free a carnal inferno of needs he’s never experienced during his previous life as a pleasure slave.

A Hero's Kiss is Book 4 in the series and takes place on a planet far away from Earth. Their ways are different than ours. Some scenes in this series include bondage, voyeurism and erotica. Reader Discretion is advised.


A Hero's Kiss has enjoyed good sales at various e-tailers for many years.

It is preferred that the same translator translate this series so we can eventually put together boxed sets or bundles. This is Book 4 in the Pleasure Bound series and was previously published with Ellora's Cave.

There are 6 books in this series


“Where are you going?” Jarod asked a few minutes later when he found his friend stuffing food into one of their tattered knapsacks.

Taylor looked up at him, his warm brown eyes filled with excitement. “I was listening at the doorway. Heard what she said about the other females. I’m going to look for them.”

Uneasiness slithered through him. The last thing they needed was to take any chances with the words of this woman. She could be lying.

“But you said you would go. Instead, I’ll take your place.”

“I only agreed because she was upset. She cannot heal if she is upset. Besides you very well know this woman could have been sent into The Outer Limits on a mission to destroy those talking Hero males or to recapture us.”

“I don’t think she is one of them. I have been forced to fuck every woman in every hub for miles around. I have not seen this one before. Have you?”

“No, but it’s not a chance I’m willing to take. She could have been recruited from somewhere else.”

Taylor frowned. “You would sacrifice two possible innocents because you don’t trust women?”

“I know you’ve sworn off women, but I haven’t,” Taylor said softly.

“Fine! If you’re so desperate for a fuck, then use the one we have here,” Jarod growled.

To his utter shock, he realized if Taylor so much as took him up on his offer or touched a hair on her head, he would kill him.

As if reading his thoughts, Taylor smiled.