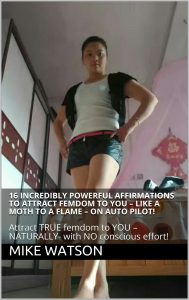 Was chatting a friend about this, that and sundry a while back ago – and the question was posed -as it has been a million time before (or so it seems!).

I was recanting one of my experience with Princess Tina, and pat came the question – half “curious”, and half (seemingly) envious (vibes don’t lie, my friend!).

“Where do you meet all these women, Mike”

“I mean, how do you meet them” he corrected me.

And my answer is the same as always – as I’ve always told you – without – I repeat, WITHOUT – “consciously” making ANY effort at all on my end.

This alone sounds like a mind bender to the vast majority of guys out there (vanilla or not) for whom “running after women” is a major pastime.

And I understand, but yet – this “running after anything” rarely results in anything but frustration – often times, repeated frustration.

Neither does sitting back and doing nothing accomplish much. You hear a lot about “wait for it to come to you”, but this piece of advice isn’t necessarily what you should be told, my friend, if you’re having trouble meeting women – or dominant women at that.

And the KEY to meeting both types of women — vanilla or not – – is simpler than you might think.

While I’ve outlined no less than TWENTY POWER PACKED – and REAL world (read very practical) tips on how to get yourself the dream dominant lady of your choice (in a SEPARATE book I’ll mention later) – the real key isn’t even in those 20 tips.

If you haven’t read that book as yet, then you really do need to in conjunction with, NOT in place of this book.

The real key is very clearly mentioned in the manual, but as Napoleon Hill said in Think and Grow Rich – – you’ll find the SECRET mentioned in nigh every chapter – – whether you recognize it or not is up to YOU.

Quoting from that book (paraphrasing rather)

I could give you the secret right now, but that would deprive you of many of the benefits you would get if you discovered it yourself.

Truer words have never been uttered (or penned), my friend!

I don’t care if you’re trying to get rich – or lose weight – or learn a new language – or write a book (or several) – or attract the dominant lady of your DREAMS – the same thing holds nigh true.

And that, coupled with the frustration so many people have in terms of finding the right submissive/dominant partner was what caused me to put out the first and IMMENSELY popular first book, but the only “flaw” in it - - if this could be termed as “flaw” is that it focused on everything - - except affirmations and literal “how to’s”.

For instance, you know (via that book) that she is always right no matter what - - but how do you DIN it into your brain so that it literally becomes part of your REALITY?

You know he’s born to serve, for instance - - but again, how do you make that thought part of your subconscious so that the vibes you unknowingly put out REFLECT the same?

Getting back to it though, why do we attract some things to us without even thinking, my friend (such as in my case)?

Why is a moth attracted to a flame? (the question I pose on the homepage), or honeybee to pollen?

Ever notice that what we think about a lot tends to come true??

The key, my friend is so simple that it should be obvious. In fact I’ve GIVEN to you not once, but twice in this here piece of wriging – but you’ll have to spot it for yourselves!

The KEY is your SUBCONSCIOUS - - and what you REALLY, really want at your deepest levels!

The 16 affirmations mentioned in this course are powerful, visual affirmations that will permanently rewire the way you as a submissive man or dominant woman see a member of the opposite sex - - and from then on, it’s smooth sailing.

Grab it now - and combine with the tips I included in "A complete guide to understanding dominant ladies from the Chinese mainland" - and watch the changes start ROLLING into YOUR LIFE - as if on auto pilot!


I love Hill’s work – and am an ardent follower of his style in my writings (both fetish wise and in my OTHER writing ventures) – in fact, we appear to share the same “brutally direct” uncanny style of “getting straight to the point” and really “zeroing in not just on the facts but the emotions behind the facts – that LED to the facts!”

As you go through this though, remember a Hill quote – – Thoughts truly ARE things.

Claude Bristol wrote a great little book “The Magic of Believing“, and in it he mentions the following – –

See yourself actually doing the things you visualize, and it will all work out, because sooner or later every thought materializes after its kind.

Now, back to last November.

It was around 1 A.M. in the morning, and I was restless. I was thinking of a few new products to create, but my mind wasn’t on it, and what was uppermost in my mind was a LADY.

A Chinese lady … a truly dominant Chinese belle … from the mainland at that, and idly, I turned to my Wechat contact list to use the “look around” feature.

Those familiar with my writings know how I’ve visualized and ended up meeting people “seemingly out of the blue” on Wechat … and I’ve written about the occurrences thereafter. If there’s ever a better testament to the power of visualization and the wonders it can magically create, its right THERE!

And I was adding ladies idly, looking at their profile pictures, but not really hoping I’d find the “right one”.