I am a writer, musician and painter who lives in the west of Ireland. I have written fiction and historical non fiction and biography, but particularly love myths and legends woven in fiction. 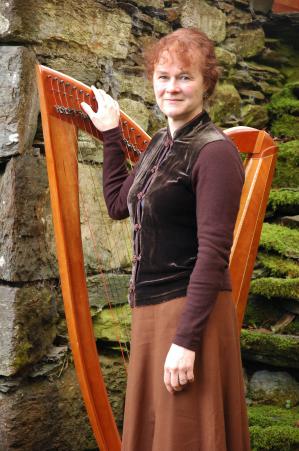 Originally from Philadelphia, Kristin Gleeson lives in Ireland, in the West Cork Gaeltacht, where she teaches art classes, plays harp, sings in an Irish choir and runs two book clubs for the village library.   She holds a Masters in Library Science and a Ph.D. in history, and for a time was an administrator of a national denominational archives, library and museum in America.  She also served as a public librarian in America and in Ireland.

She has published five books to date including four historical novels: 'Selkie Dreams', 'Along the Far Shores' and 'Raven Brought the Light' which have a Celtic/Native American focus.  She has recently published an English historical novel 'The Imp of Eye.'

novelist Karen Maitland described 'The Imp of Eye' as 'story-telling at its best'.

Kristin has also published a biography on a First Nations Canadian woman, 'Anahareo: A Wilderness Spirit.  Her essay, ‘Blazing Her Own Trail: Anahareo’s Rejection of Euro-Canadian Stereotypes’  was published in, Recollecting: Lives of Aboriginal Women of the Canadian Northwest and Borderlands edited by Sarah Carter and Patricia McCormack, and published. Athabasca University Press.  It has been awarded four prizes, including the Canadian Historical Association prize for Canadian Aboriginal History.