White is the Coldest Colour by John Nicholl 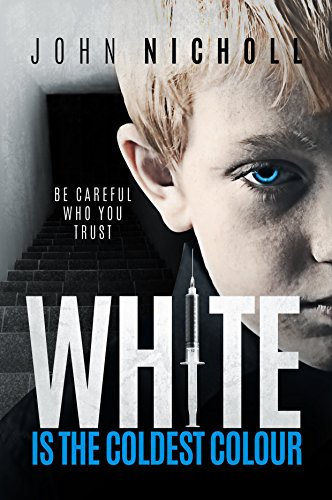 The bestselling dark psychological suspense thriller by ex police officer and child protection social worker, John Nicholl.
The Mailer family are oblivious to the terrible danger that enters their lives when seven-year-old Anthony is referred to the child guidance service by the family GP following the breakdown of his parents’ marriage.

Fifty-eight year old Dr David Galbraith, a sadistic predatory paedophile employed as a consultant child psychiatrist, has already murdered one child in the soundproofed cellar below the South Wales Georgian town-house he shares with his wife and two young daughters.
Anthony becomes Galbraith’s latest obsession and he will stop at nothing to make his grotesque fantasies reality.

The book includes content that some readers may find disturbing from the start. It is dedicated to survivors everywhere.


and jumped into the driver’s seat with a self-satisfied expression on his angular face. He took a moment or two to appreciate the car’s lavish interior and smiled broadly before starting the engine… He’d earned it. It was nothing less than he deserved: a warm, sumptuous haven of supple grey leather and polished walnut. A man of his accomplishments and elevated status deserved such luxuries.

The doctor turned the ignition key and the 4.5-litre V12 engine roared into life… It was a good sound, a reassuring sound that pleased him.

As he drove the eighteen miles from his home to the South Wales Department of Child, Adolescent and Family Psychiatry where he was employed as a consultant child psychiatrist, he happily anticipated arranging Anthony’s initial appointment… Anticipation was a part of the pleasure. Not as pleasurable as it had once been, possibly, but still agreeable. The waiting had become more difficult; he had to acknowledge that. But things shouldn’t be rushed this time, whatever the temptation. He’d made that mistake once before.

He shook his head aggressively and tapped two fingers repeatedly on the steering wheel… Maybe he wouldn’t be so lucky the next time.

The doctor’s head was instantaneously filled with violent vibrating sound that made him wince. He closed his eyes for a fleeting moment, trying to ignore the pain, and then quickly reopened them, suddenly aware of the morning traffic… Come on, man. Get a grip.