Warlock, A Novel of Possession by Perry Brass

A demonic story set in the glittering, international world of greed and power, Warlock is mesmerizing, seductive, and tense with suspence, about the "work" of warlocks and sexual possession. 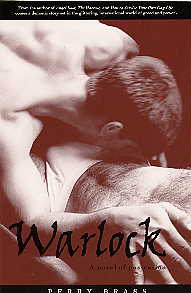 A tale of intense sexual possession told in the gothic style of  "Rosemary’s Baby." Destry Powars, rude, crude, gay, hyper-sexed, a closeted low-life from the gutters of New Jersey, becomes rich and successful in new York due to his involvement with evil forces. Suddenly one night, he meets Allen Barrow—a sweet, shy, soulful guy, whom Destry is sure still possesses the real innocence that Destry lost in the process of becoming a powerful business warlock.

Destry offers Allen everything he can, and takes him with him to a yearly meeting of other evil, soulless business "leaders" at a posh resort in Switzerland, where they total up all of their promises, losses, and wins for the year. Destry knows that his time in the sun is past—he can no longer fool evil or fool with it. But he has fallen so hard for Allen that he will have to sacrifice himself for him, when the other minions of evil ask for Allen’s life in return for Destry’s.

In the end, Allen will take Destry’s place within the coven of warlocks, who use greed as their way of gaining power intthe world. And he will wait for Destry to return to him, in no matter what unearthly form Powars choses.

This novel is a perfect parable for the Age of Donald Trump, when evil dismisses truth, when money means "reality," and the soul of a whole new generation is up for sale.


Warlock was very successful when it came out in 2001, in the middle of the famous Enron scandal and people were starting to equate big business with a total lack of morals. It was on many independent bookstore bestseller lists and got some excellent reviews. Rchard LaBonte in his nationally sybdicated "Book Marks" column said: "Brass tackles a number of contemporary themes in his compelling tale of dark arts, among them [gay] attitude, sexual idealization, class divisions, and - most particularly - the mysterious world of high finance, all of which he addresses with brash opinion. Mostly, though, he spins an old-fashioned fantastical entertainment."


My shame, my shame; my bitter, punching, screaming shame—my God, he’d be so incensed if he knew I were telling you this. But what else can I do? I’m torn up with grief. He’s gone. I get up at three o’ clock in the dark and pace back and forth through these big empty rooms waiting for him. This luxurious place, that he’s given to me to live in near Central Park, is a prison. I have never been in such splendor, luxury, style and pain. My insides crawl for him. I feel a loss inside that resembles tumbling down a yawning elevator shaft. Down, down, down to the bare hell of my existence. This is stark love. I know it. I rage sometimes. I get up angry. Why did this have to happen to me? What is so unique about me to feel such twisting, frantic helplessness? I can’t control it. Is it organic? A part of my very self that he recognized and pulled out of me, as it waited stupidly, mutely, for him?

And now I know.

I can only humiliate myself to him. Did you know that the words “humility” and “humiliate” come from the same root, humus? Dirt. It means to make dirt of oneself, yet isn’t dirt what we all come from? The products of dirt. The grain. The fruit. The solid, life-sucking, bitter roots. The animals that feed on them. And then, finally, feed us. So to be humiliated is only to go back to the source from which we came—the dirt, the mud—returning to our own . . . oblivion. That’s what I sought from him: my oblivion.