The post-apocalyptic story of a girl on a cruise ship that's been crippled by an terrorist EMP, destroying power and stranding the ship in the middle of the ocean. 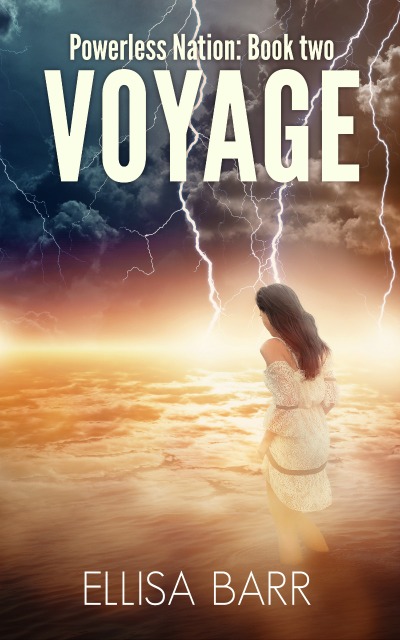 In this harrowing companion novel to Ellisa Barr’s book, Outage, the devastating effects of an EMP attack are experienced all over again, only this time the story unfolds on a cruise ship far out to sea.

Sena Morgan has just begun the voyage of a lifetime, but she’ll never reach her destination. A terrorist-launched EMP destroys the ship’s power and communication systems and starts a fire onboard, leaving thousands of passengers stranded in the cold, northern Pacific. As food and water dwindle, strangers with a deadly secret are brought aboard the ship. Sena’s only hope of survival is to get as far from them as possible, but at sea there’s nowhere to run.

Sena meets a couple trying to get home to their daughter in a small town in Washington. Together they will face unspeakable challenges as they try to reunite with their families despite a terrifying new reality.

Written for all fans that love apocalypse stories, Voyage is a Young Adult survival novel that mixes an action packed story with themes of family, hope, and determination. The events in Outage and Voyage happen simultaneously, so readers can read the series in any order.


Voyage has been out for just over 1 month and sold short of 1,000 copies.  I've been approached by a publisher who is looking to acquire all rights to re-publish the first book in the series - Outage.  They are excellent at marketing, so Voyage will be getting quite a bit of attention starting late this spring and hopefully going through the end of the year.  Both of my books typically rank in the Amazon overall list between #6,000 and #18,000.

“Sir, we’ve lost all power and comms to the bridge.  Power to the ship appears to be down but there’s no report yet from the engine room.  Radio is down, radar is down.  And there’s… that.”  He pointed to the wreckage of the airplane, the flames appearing to float on the water.

The captain turned to one of his crew, “Get down to the engine room and find out what’s going on.  I want the power back on now.”  The crewman left the room at a run and the captain pointed at another.  “Find Lydia and send her in.  Why isn’t she here?  What’s wrong with you people?  This is going to be a PR nightmare.”  He shook his head.  “I’ll be ruined.  He moaned and sank into the captain’s chair.

“Sir,” said the staff captain, “what about the plane?”

“What about the plane?”

“We need to help them.  There could have been survivors.”

“Don’t tell me what I need to do, staff captain.  Look at that mess, there’s no way anyone survived that.  If they didn’t die on impact they’re rotisserie chicken by now.  We’ve got our own problems to deal with.”

Rue couldn’t believe what she was hearing.  From the look on the staff captain’s face, and several others in the room, she wasn’t the only one.

“I said no.  If this is a terrorist attack I need my people here, ready for action.”

“Terrorists?” gasped the actress, collapsing dramatically in a nearby chair.

The captain’s tone changed.  “Don’t worry, my dear.  You’ll be safe with me.”