Tiger Lily of Bangkok in London by Owen Jones

The Tiger re-awakens while studying in a London children's hospital. 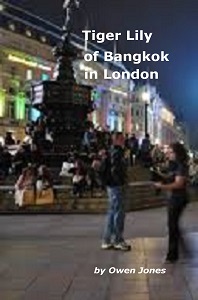 Tiger Lily of Bangkok in London

After the devastating effect her rampage had on her own life and the citizens of Bangkok in her early days as a medical student there, Lily's life quietened, and she settled down to her studies. After two years, she won a scholarship to work in Great Ormond Street Children's Hospital in London and moved there without Ron, who continued his education in Bangkok.

'Tiger Lily of Bangkok in London' picks up her story in her second of two years as a student doctor at the hospital. She loves her job there, and gets on well with the staff and children patients alike, but she has no friends outside work.

On one of her days off, she reads an article in the Sunday Times about organised paedophile rings in London involving the very establishment of the country itself and it incenses her.

She can either ignore it or get involved.

Her first reaction is to avoid re-arousing the Demon that had possessed her in Bangkok only a couple of years earlier, but when she meets fellow victims of child abuse, the die seems cast.

This story is not for the squeamish, but does not describe acts of child abuse. It does, however, make frequent references to notorious scenes of child abuse, especially the infamous 'Meat Rack' on Piccadilly Circus in central London.

Many of the issues raised are still under police enquiry at the time of writing, although few people expect anything to come from them.

Shame on our so-called leaders, who would rather protect the powerful abusers than the powerless abused!


Tiger Lily 2 rides on the wave of the success of Tiger Lily 1.

Audiobook sales are promising and should boost English-language sales.

The Lily mini-series is currently being translated into most mainstream European languages.

Lily was a good intuitive shot. She was one of those people who doesn’t seem to have to take aim like most marksmen. Whatever her eyes were looking at was in trouble – they were her laser-targetting devices. She threw her meat cleaver and hit David Cameron right between the eyes. She had been willing the blade to find that spot, but she knew that she had hit it as much through luck as judgement.

She was still fuming mad, so she jumped up and retrieved the six assorted kitchen knives from the two chopping blocks to which she had attached six photos of famous politicians and personages cut out of the Sunday Times colour supplement from various articles. The chopping blocks were hanging from cords like dartboards on the far wall of the kitchenette.

“How dare they?” she said to no-one but the photographs. “How dare they allow child abuse to go on under their very noses and do nothing about it!?”

Leon Brittan got a steak knife in the right eye... Ted Heath and Jimmy Savile also suffered fatal wounds, but she was still most proud of the Cameron shot, although hitting any part of a three by four inch photograph from ten feet with ordinary domestic cutlery was quite a feat in itself, especially as she hadn’t practised since she’d left Bangkok.

Lily was no ordinary young woman though.

She had studied martial arts in her native Thailand and taken up archery in conjunction with that. Throwing knives or indeed anything sharp had just happened, because she couldn’t practice archery in her flat, first in Bangkok and now in London. She was still a medical student, but she had managed to get a placement in Great Ormond Street Children’s Hospital for two years.

She had one year left.