This Time for Keeps by Jill Blake 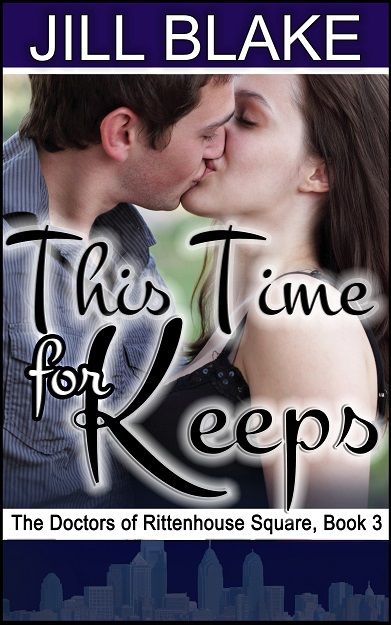 A second chance at love...
But sometimes the past can be hard to let go of, especially when old flame Luca Santoro reappears in her life and decides he wants to start over...this time, for keeps.


Luca glanced surreptitiously at his watch.

“Not a fan of long toasts?” The husky murmur came from the woman seated to his right. Isabelle DiStefano, one of the bridesmaids.

He stifled a smile and whispered back, “Is anyone?”

She shrugged a smooth white shoulder. “The giver of the toast, I imagine.”

This time he did laugh, an explosion of sound that earned him a few dirty looks from nearby guests. He wasn’t sure who the long-winded speaker was—his attention had been focused more on Isabelle than on the introductions at the head table—but he really wished the man would wrap it up already.

Having lectured before both students and colleagues over the years, Luca knew that if you didn’t snag your audience’s attention within the first ten seconds, you might as well pack it in.

Too bad the man droning on and on about the sanctity of love and the sacrament of marriage hadn’t learned that lesson.

Luca shifted in his seat, his thigh brushing up against the silk-clad leg beside him. He felt Isabelle tense, and waited to see what she would do next. Her attentive expression didn’t change, and above the waist she remained perfectly still. But to his delight, he felt the responding pressure of her thigh against his.

They’d been flirting for hours, practically from the moment they’d met earlier that evening. She was an old college friend of the bride’s, from some all-girls school in a posh suburb of Philadelphia. But unlike the bride, who seemed a little intense, Isabelle was all vivacious chatter, sparkling wit, effervescent laughter. Once in a while, he thought he caught the fleeting hint of a shadow cross her face. But then it was gone, a trick of the light, and she was sparkling again, a gamine smile on her lips, a coquettish flutter of red-tipped fingers against his arm.