The Warrior's Prize by Claire Delacroix

The maiden was just another treasure to be won—until she stole his heart and changed his life forever. 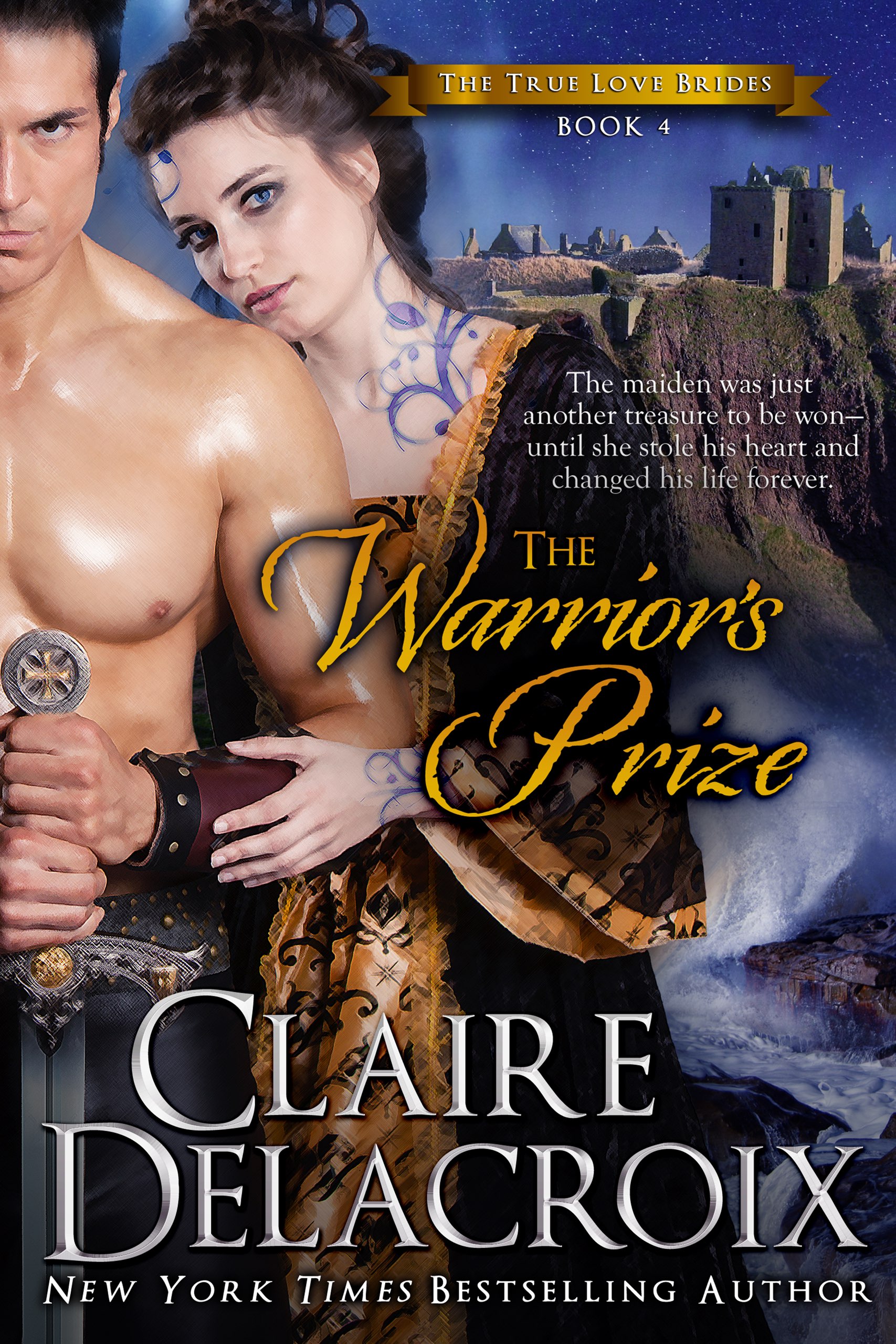 Outraged that her beloved brother’s soul is to be the Fae tithe to Hell, Elizabeth knows that she must save him. She is the only one in her family who can see the Fae, after all, and is already cursed by their king herself. Malcolm may have offered to replace his comrade out of honor, but Elizabeth knows who better deserves to live—and it is not the handsome rogue, Rafael, who is concerned with his own welfare alone. It should be easy to make a wager with a mercenary, especially as Elizabeth does not care about the cost to herself. To her surprise, though, Rafael proves to be the man who not only takes her dare, but banishes the Fae king’s curse with kisses that turn her blood to fire. Could this hardened warrior, who appears to have no heart, be the destined love she has awaited?

At first glimpse, Rafael believes Elizabeth to be an angel sent to judge him—and he knows what her verdict will be. He has made choices in order to survive, and is not proud of them. But Elizabeth dares him to change, with an audacity that awakens a nobility of purpose that Rafael has forgotten he possessed. Can this bold maiden heal the wounds of his past? Can Rafael earn the right to grant her the life she deserves—and do so before the Fae king springs his trap, making Elizabeth his captive forever?


This is the fourth book in my medieval romance series, The True Love Brides. Since the books must be read in order, please offer first for The Renegade's Heart.


Elizabeth had watched the Fae gather for Midsummer’s Eve and hasten toward the sister keep of Ravensmuir. She did not trust their actions a whit, and knew she had to go to Ravensmuir to discover the truth. Alexander had changed his thinking about escorting her there once a company of mercenaries traveled toward Malcolm’s keep, so Elizabeth had stolen out of Kinfairlie this very morning, with her beloved mare, Demoiselle.

To her surprise, she had met the Earl of Douglas on the road at such an early hour, with his niece Jeanne and a company of men escorting them. Jeanne was richly dressed, as if she meant to attend a coronation, though there was no other destination on the road than Ravensmuir.

Elizabeth recalled the earl’s insistence that Malcolm was betrothed to his niece, this Jeanne, and bit her lip. She had heard just days before that Malcolm had taken a bride. All of Kinfairlie was aflutter that Malcolm had wedded the serving maid Catriona, seemingly on impulse, naming the son she had delivered in Ravensmuir as his heir.

Evidently her companions had not yet heard the news, and Elizabeth would not be the one to enlighten them.

They rode in comparative silence, none of them evidently welcoming questions about their plans. Perhaps it was the hour, but Elizabeth was content to be silent.

When the new tower of Ravensmuir came more clearly into view, she could not help but gasp aloud.

“Zounds,” the earl muttered beneath his breath. “What a fortification!”

Jeanne straightened in her saddle with evident interest.

Elizabeth surveyed the new structure with awe. Ravensmuir’s new keep resembled the lost one in many ways, but was more formidable. While the old keep had been forbidding, perched on the coast like a bird of prey, this one was tall and bold, taking a resolute stance.