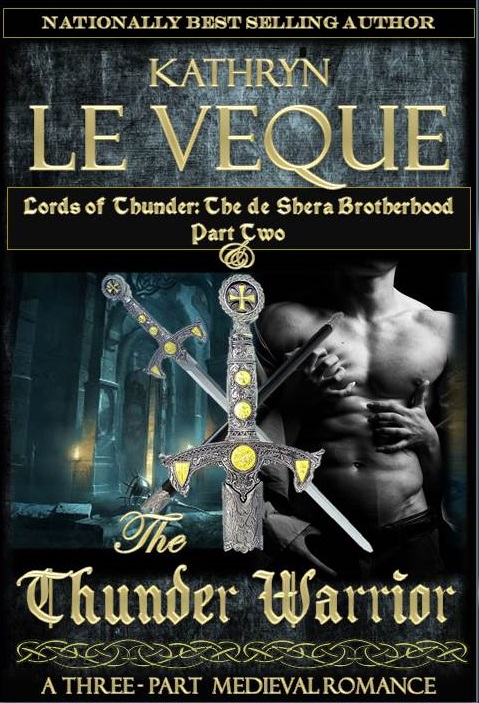 Welcome to the Lords of Thunder trilogy - Book Two

May 1258 A.D. - Now, Simon de Montfort is amassing a parliament whereupon King Henry and Simon will all have equal representation. As the politics in this difficult time begin to gain speed, Maximus de Shera, the consummate warrior and middle brother of the de Shera brother trio, has something very unexpected happen to him. In the midst of the political turmoil, he finds love in the daughter of a de Montfort supporter.

Lady Courtly Love de Lara is no ordinary woman - she is strong, wise, reasonable, and resourceful as well as being blindingly beautiful. As Maximus' brothers become sucked in deeper to de Montfort's intrigue, the strongest brother of all is distracted by a beautiful lady. The lady's father, however, is opposed to Maximus' suit and makes every effort to send his daughter far away where Maximus cannot find her.

When Maximus is needed most in the struggle against Henry III, The Thunder Warrior is off on a quest of his own to locate, and marry, the woman he loves and do battle against a man he once considered an ally. Deep passion, family betrayal, family honor, grief, and a powerful love story culminate in Book Two of the Lords of Thunder Trilogy.


The Thunder Warrior: The de Shera Brotherhood Book 2 was a number one ranked amazon release in Medieval Historical Romance.

The Thunder Warrior has an average 4.6 amazon star rating on a 5.0 scale with over 120 reviews.


It was a day of days, a mild spring day that was perfect in every fashion. The sun was brilliant against the deep, blue expanse of sky with nary a cloud to hamper the view. Days like this were rare, neither hot nor cold, but in that perfect temperature that seemed to bring out the best in both man and beast. A breeze, as soft and caressing as a child’s whisper, whistled through the busy and proud town of Oxford.

The Street of the Merchants was a bustling road that was lined on both sides by close-quarters buildings, stalls and shops that were manned by aggressive salesmen determined to push their wares upon a spend-happy public. Between St. Clement’s Church and the castle stretched the main thoroughfare through the town, and travelers spilled into the Street of the Merchants, just off the main road. This created a crowded bottleneck at the head of the street.

Four armed knights pushed themselves through the bottleneck and ended up in the crowds shopping along the avenue. The smells from the bakers on the next street wafted heavily in the air, the scent of yeast and of hard, brown crusts making for hungry shoppers at this time in the morning. Near the middle of the avenue near a fabric vendor’s stall, a man playing what looked like a crudely made vielle stood in the tiny gap between two buildings while his daughter, a round girl with a big mouth, sang quite loudly and somewhat off key. All of it, the sights and smells of the day, contributed to the hurried setting.

“Licorice root, wasn’t it?” one of the knights asked the group. “And spiced wine?”

The knight in the lead, a very large man with massive shoulders and a crown of dark, wavy hair replied. “Wine with marjoram,” he said. “She was specific. It settles her stomach, as does the licorice.”