The Serpent and the Eagle by Edward Rickford

Book One in the Tenochtitlan Trilogy

Set in pre-Hispanic Mexico, The Serpent and the Eagle follows an extraordinary military expedition that toppled a seemingly invincible hegemon, established the first European foothold in all the Americas, and helped usher in the era of world trade. 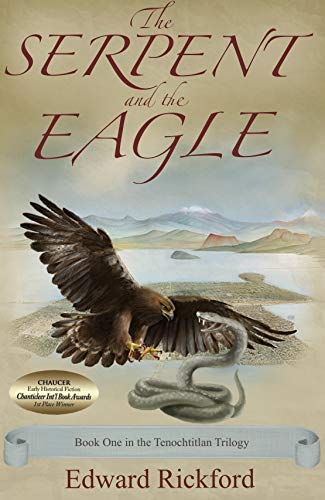 Tenochtitlan, 1519. Motecuhzoma, leader of the Mexica Confederacy, rules over the largest domain in all of Mesoamerica and has every expectation that his nation will continue to reign supreme… but the arrival of strange foreigners will test that confidence.

Driven by God, gold, and glory, the uncouth interlopers are led by Hernando Cortes and command weapons that can shake the sky. They hail from a faraway land called Spain, and they may have sinister designs. Their disruptive presence demands a response, and the choice Motecuhzoma must make could elevate his nation to new heights or cause its ruin.
Combining the political intrigue of Hilary Mantel with the gripping battles sequences of Conn Iggulden, this award-winning novel draws upon modern scholarship to recount an event still unique today: the epic collision of two civilizations separated for millennia.


As of May 17, 2019, The Serpent and the Eagle has been available on Amazon for almost two months. In that time, almost 200 copies of the book have been ordered and the sales ranking have often placed the book in the top 500 for Cultural Heritage fiction and Native American fiction. When I announced I had won the Grand Prize Award in the 2018 Chaucer Book Awards, my sales and ranking improved significantly and I suspect the same will happen with other awards I win.


Chapter 1
Aguilar licked his lips, relishing the briny taste imparted by the tangy ocean breeze. Nearby, a one-armed slave struggled with a bucket of hot tar and a fleet-footed boy scurried up the main mast, but neither kept his attention long. His gaze drifted to the soldiers practicing drills, the pilots taking measurements, the loose sails that flapped with a rhythm not so different from his heart. Aguilar let out a contented sigh. The Santa María de la Concepción exuded so much purpose and activity that a part of him wondered if he was looking at a living organism rather than a technological marvel.
“Has your return to Christendom been all you imagined?”
Aguilar jumped at the sound of Captain Cortés’ voice and whipped his head toward him.
Cortés’ broad shoulders and scarred knuckles seldom failed to grab Aguilar’s attention, but most striking was his posture. With a hand never far from the crucifix hilt of his sword and knees slightly bowed, Cortés appeared poised to strike whether in casual conversation or heated argument. A mere glance from him could check the ruffians.
If Aguilar stared at a crew member, he received disgusted sneers. Perhaps it was his unkempt hair or his fidgety eyes, but neither expedition veterans nor hardened sailors cared to hold his gaze. Aguilar studied his hands. Once soft and gentle, they were now calloused and raggedy. A man could only spend so long in the wilderness before he became something else.
“Lost your hearing?” Cortés asked. His voice came across light and piercing, a rapier in the hands of an expert fencer.
Aguilar apologized in Yoko Ochoko, and then remembered he was supposed to speak Spanish.