The Legacy and Other Stories by Edith Layton

Previously published individually, these four great novellas are collected in one book for the first time! 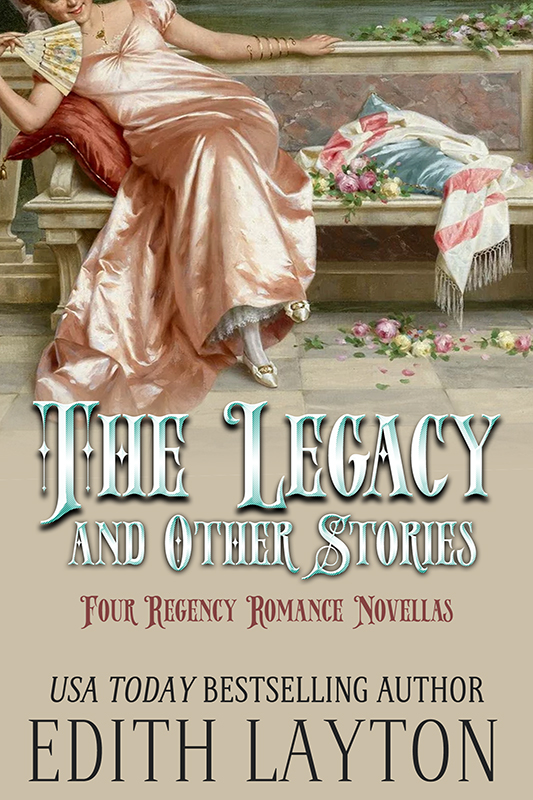 Previously published individually, these four great novellas are collected in one book for the first time!

“The Legacy”—Valerian Blackwood is summoned to his aged uncle’s country estate to help the old man settle a problem with his heir. What Valerian finds is a mystery—and the love of his life. He only has to decide which is more important to him: solving the mystery or winning his lady.

“Buried Treasure”—What is Hannah Jenkins to make of the wildly attractive silver-tongued man villagers bring to her family’s house after he is found injured on the shore near her seacoast home? He says he was the victim of pirates. But who is the pirate, and who is the prey?

“Something Blue”—June Heywood’s coming wedding day is clouded by a vicious remark she overhears, causing her to wonder why the handsome and clever Lawrence, Lord Morrow, ever asked for her hand. Who should she believe? Gossip or her heart?

“A Marriage of True Minds”—The bride’s sister and the groom’s brother, alike in temper, lock horns—all the while missing what their relatives can so plainly see.


Edith Layton is one of our top authors, and one of the biggest Regency romance authors of all time. All of Edith's titles are available for translation. Edith's titles have generated nearly $70K in print/ebook sales in the few years we've had her backlist.


The afternoon was bleak, the sky was gray, and the house and its furnishings so old and worn they complemented the day rather than defying it. But curiously, the elegant young gentleman awaiting his host in the dim study was neither depressed nor dissatisfied, even though his fashionable clothing was as much at odds with his surroundings as his bemused smile was with the lowering day. The leaded windows let in dreary February light, so the room was lit only by a glowing fireplace, which, considering its threadbare state, was a kindness. But nevertheless, the gentleman seemed pleased. He glanced about, stretched out his glossy boots in front of him, and sighed, content, as much at ease with the room as he would be in his favorite old dressing gown—the paisley one that was too worn for fashion but too comfortable to discard.

Nothing here had changed. That was as rare in this age of discovery, where war and fashion changed a man’s geography every time he turned around, as it was at his own particular age, the gentleman thought ruefully. For lately he’d discovered his friends and family changing even more rapidly than the world around him was. He’d returned from the wars by sea because Napoleon had been busily changing familiar borders while he himself had been trying to stop him from doing so, only to find the familiar borders of his own life entirely altered once he’d gotten home. His mama had married again. And though he couldn’t blame her, widowhood having been no doubt as boring as it was unprofitable for her, it was odd to feel an alien in the home of his childhood. He’d suddenly acquired a father who seemed not much older than himself, and a mother who was suddenly a sexual being.