The Grace of a Duke by Linda Rae Sande

He reigns as a broken man. But can she make him whole? 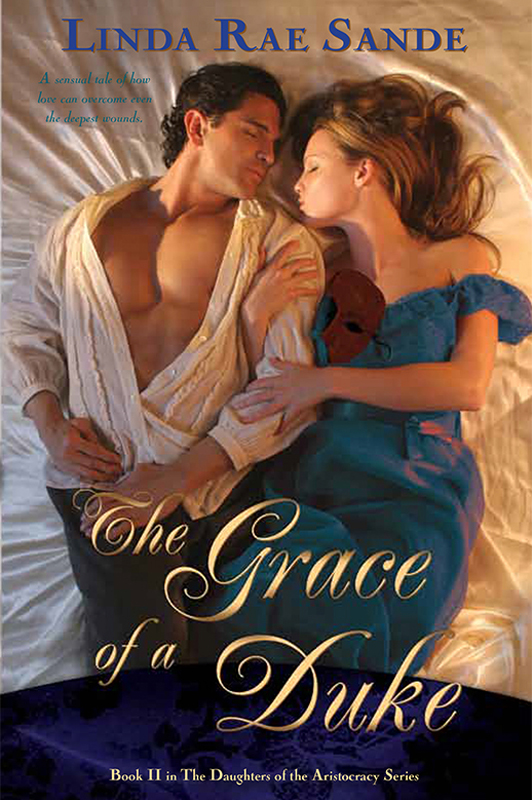 Reeling from the devastating fire that killed his family and haunted by his horrific scars, Joshua Wainwright begins his reign as Duke of Chichester a broken man. Forced to wear a mask that covers half of his face, Joshua struggles with the emotional toll of his scars and the feeling that he’ll never find a woman who truly loves him.

When her future is stolen from her after the death of her fiancé, Lady Charlotte finds herself in desperate need of someone to marry. She always had a secret crush on Joshua – and with her future uncertain, she becomes determined to take the Duke’s heart and prove her love to him.

Unable to shake the feeling that Charlotte would only marry him out of duty, Joshua struggles to resist her charms. But when a surprise suitor appears to take Charlotte’s hand, he’s forced to come face-to-face with his feelings and make a choice that will shape both of their futures forever…

Can Joshua open his heart to Charlotte and admit his feelings for her? Or will his only chance at true love slip between his fingers?

Imbued with wild passion, a dash of intrigue, and all the classic charm of 19th century British aristocracy, Grace of a Duke is a gripping historical romance novel that is perfect for readers looking to get their emotional fix.


The English version is available at all major retailers. The ebook sales = 15,800 copies. The current ranking on Nook is 134,567.


“I am not familiar with the horses,” he commented, realizing he rarely recognized people by their equipage but rather by the team that pulled it. “And I am not expecting anyone today,” he added under his breath, suddenly imagining a fairy godmother. Perhaps she could conjure a decorator to deal with the decisions regarding the rebuilding of the house. He could only hope.

“I really do not have time to see anyone. Unless one is a decorator, in which case, please send him in,” Joshua added with a hint of amusement.

Gates nodded, understanding his master’s odd comment. “As you wish, Your Grace,” he said before stepping out of the library and closing the door behind him.

Joshua continued to watch out the window, noting the black coach was marked and of good quality, but he couldn’t make out the coat of arms from his angle at the window. A groom had rushed to open the door and put down the steps before handing down a passenger.

Straightening as much as he could, Joshua regarded the woman as she surveyed the house, unaware she was being watched by the duke. She straightened her pelisse with a dainty gloved hand before taking a step toward the house. Due to the small size of the stylish bonnet she wore, he could tell she was blonde.

Was her expression one of excitement, perhaps? Or was that trepidation? When another woman, apparently a maid, given the style of her traveling clothes, was handed down, the first turned and smiled.

He knew that smile. Knew the mass of blonde curls piled high under the small bonnet. Knew the peaches and cream complexion and full lower lip and generous bosom...

Lady Charlotte Bingham. She was here.

Collection/Series:
The Daughters of the Aristocracy