The Beauty Bride by Claire Delacroix

An arranged marriage, a runaway bride, and a warrior determined to win his wife's heart... 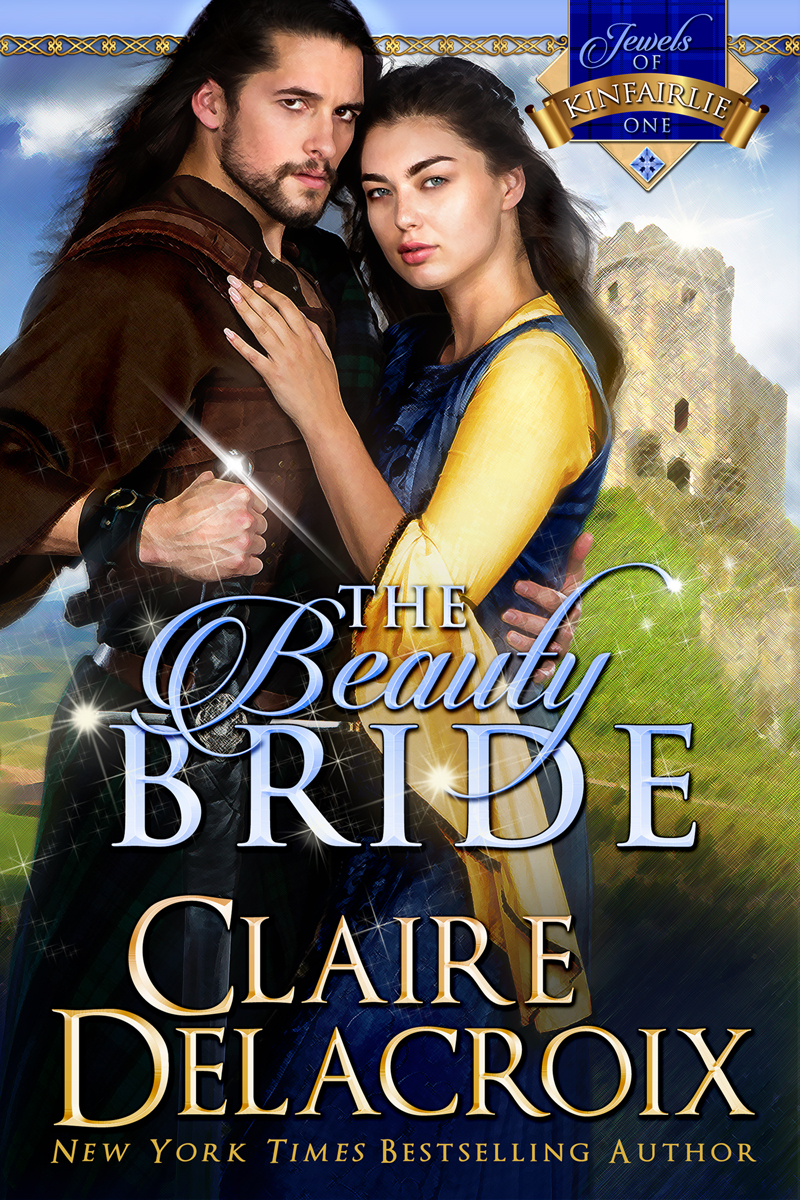 More cherished than gold are the Jewels of Kinfairlie, and only the worthiest may fight for their love…The Laird of Kinfairlie has unmarried sisters, each a gem in her own right. And he has no choice but to see them all wed in haste.

Lady Madeline’s heart is not for sale…especially not to a notorious outlaw like Rhys FitzHenry. Yet Madeline’s hand has been sold, to none other than this battle-weary warrior with a price on his head. A more dutiful maiden might cede to the Laird’s command and meekly accept her fate, but Madeline has never been obedient. She decides to run away, though she never dreams that Rhys will pursue her.

She does not expect this taciturn man to woo her with fanciful stories, much less that each of his enthralling tales will reveal a scar upon his shielded soul. She never imagines that a man like Rhys could imperil her own heart while revealing so little of his own feelings. When Rhys’ past threatens his future, Madeline takes a leap of faith. She dares to believe him innocent—and risks her own life to pursue a passion more priceless than the rarest gem.


The Beauty Bride is a USA Today bestselling title, and first in my Jewels of Kinfairlie series of medieval Scottish romances. It was nominated for PW's Quill award when originally published. It is often a free series starter, although when paid, it has been #1 in the Kindle store. Today (April 4, 2019), it is free, and ranked at #6 in medieval romance and #9 in Scottish romance in the Amazon.com store.

It is first in a trilogy, which also has a short story, and the entire series needs to be translated. There are three books of roughly 100,000 words and the short story of 10,000 words.


Alexander, newly made Laird of Kinfairlie, glowered at his sister.

There was no immediate effect. In fact, Madeline granted him a charming smile. She was a beautiful woman, dark of hair and blue of eye, her coloring and comeliness so striking that men oft stared at her in awe. She was fiercely clever and charming, as well. All of these traits, along with the score of men anxious to win her hand, only made Madeline’s refusal to wed more irksome.

“You need not look so annoyed, Alexander,” she said, her tone teasing. “My suggestion is wrought of good sense.”

“It is no good sense for a woman of three and twenty summers to remain unwed,” he grumbled. “I cannot imagine what Papa was thinking not to have seen you safely wed a decade ago.”

Madeline’s eyes flashed. “Papa was thinking that I loved James and that I would wed James in time.”

“James is dead,” Alexander retorted, speaking more harshly than was his wont. They had had this argument a dozen times and he tired of his sister’s stubborn refusal to accept the obvious truth. “And dead the better part of a year.”

A shadow touched Madeline’s features and she lifted her chin. “We have no certainty of that.”

“Every man was killed in that assault upon the English at Rougemont—that no man survived to tell the tale does not change the truth of it.” Alexander softened his tone when Madeline glanced away, blinking back her tears. “We both would have preferred that James’ fate had been otherwise, but you must accept that he will not return.”

He was pleased to note how Madeline straightened and how the fire returned to her eyes. If she was spirited enough to argue with him, that could only be a good sign.

Collection/Series:
The Jewels of Kinfairlie