The Bazaar: Book One of the Devany Miller Series by Jen Ponce

Two worlds, one woman, and a magical thread that ties them all together. 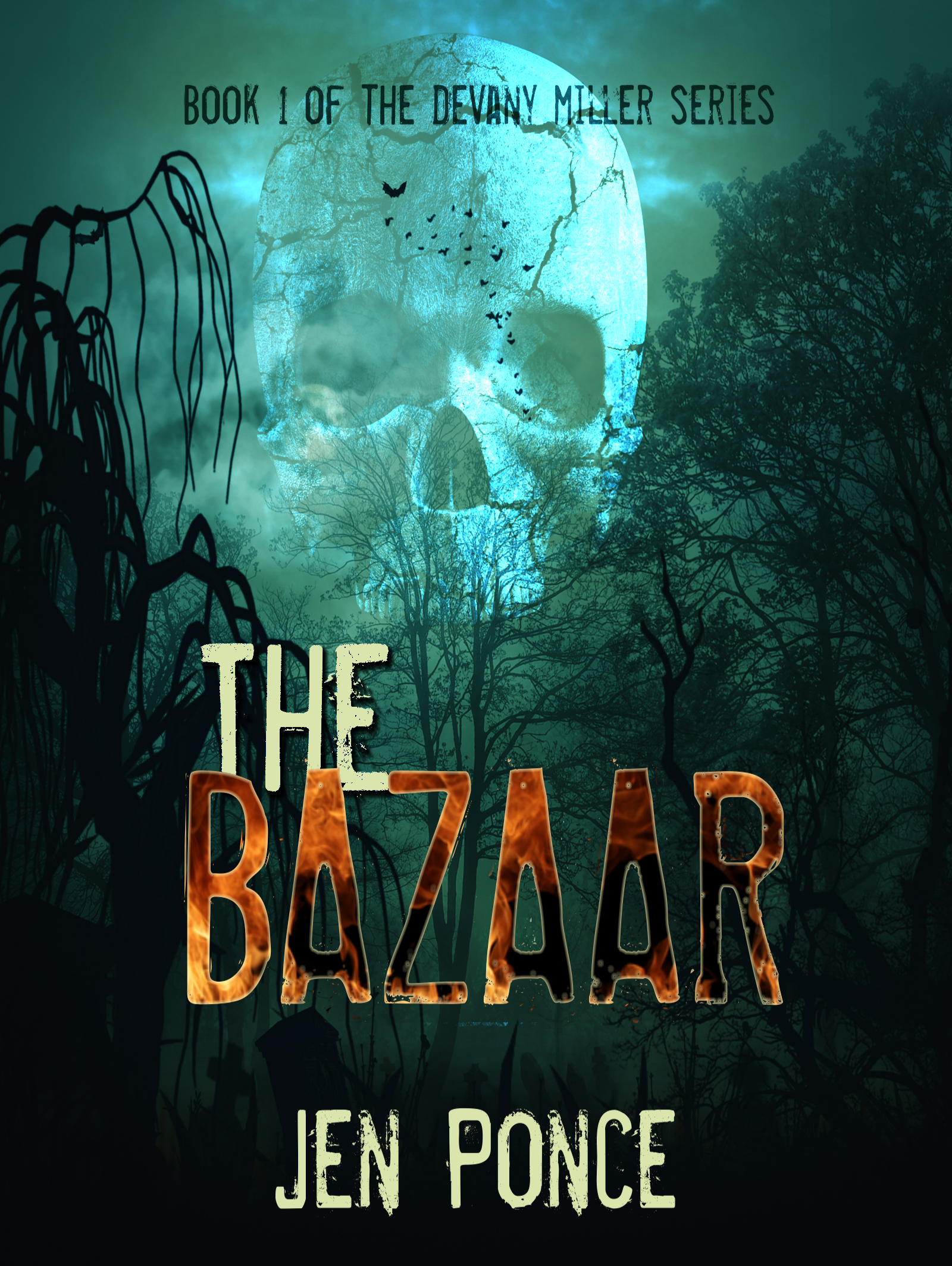 Devany Miller’s job as a victim’s advocate roots her in reality as firmly as a person can be, which makes the offer of ‘magic sugar’ from a gorgeous salesman at a psychic fair all the more fantastic. The sugar, he tells her, will allow her to visit the exclusive vendors tucked away in the shadows beyond his tent. Indulging in fancy, she takes a taste and ventures into what she figures is a tourist trap. Then the screams begin and Devany is yanked violently into a world of butchered humans, of witches who make foolish deals with demons, and of spiders that use human skins as camouflage for their assassinations.

Devany’s normal life begins to crumble into madness as she struggles to stay alive. Her marriage falls apart. And of course, there’s the little matter of the demon who has laid claim to her, and the powerful creature that wants to take her apart piece by piece to taste her soul. Despite her fear, Devany has children to protect, and she can’t sit idly by while monsters in the guise of people drag innocents to their deaths.


The Bazaar has over 30 four and five star reviews. Over 2000 copies have been picked up (both paid and free promo copies.)
It currently has a ranking of #654,657, which climbs when I do promos. It's steadily increased in sales.


The line for the fortuneteller stretched halfway down the block and gave my husband and me a chance to people-watch. Well, I was watching people. Tom was on his phone texting someone. I nudged him in the side. “Do you see the guy over there? I think he just pinched his girlfriend.”
He grunted, glancing up but not really seeing anything. I fought back the urge to pinch Tom since it would be hypocritical. Instead I watched the man carefully. He was smiling, his eyes dead and flat as he crowded the woman. She was pressed tight against a metal barrier separating the crowd from the children’s ride rattling behind her, staring resolutely at his shoulder. It reminded me of someone facing down an angry dog.
“Do you think I should go over there?” I winced when the man fisted his fingers. I didn’t even realize I’d taken a step in their direction until Tom grabbed my elbow.
“And do what?” Tom squinted at the guy. “The one with the neck tattoos? Hell no, you aren’t going over there.”
The asshole glanced around and decided to put his hand in his pocket instead. I jerked my elbow from Tom’s grasp. “It’s not the tattoos I’m worried about, it’s his fist.”
“Call the police then.”
I shut my eyes and counted to ten. Had he not listened to anything I had to say about my job? You didn’t just call the police when there was domestic violence. It wasn’t that simple. “Who are you texting?” I leaned over and he tipped his phone away from me.
“Nate.”
I raised my eyebrows. “On our date?”
“We’re married. We don’t date, we hang out together.”