Surviving the Fog by Stan Morris

A post apocalypse book about forty eight teenagers trapped at a camp in the southern Sierra Nevada Mountains by a mysterious and dangerous brown fog. 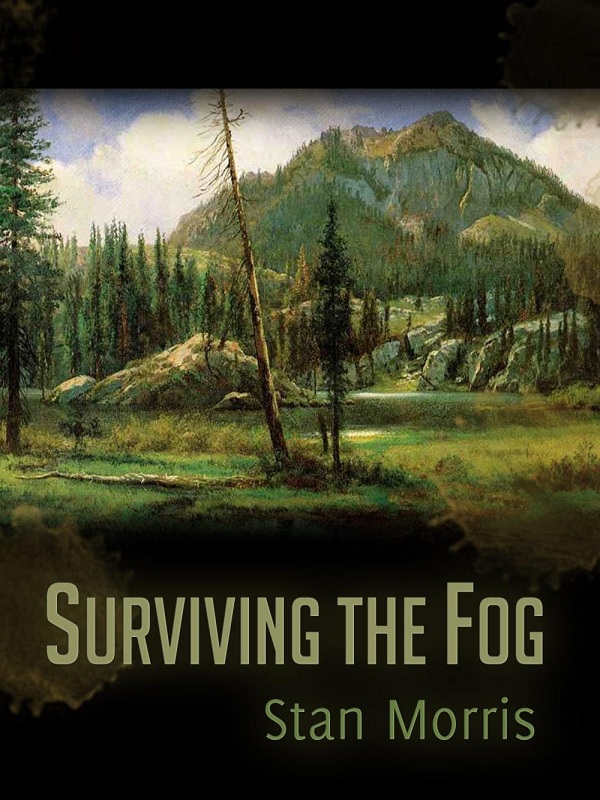 Surviving the Fog is about a group of teenagers attending a camp in the southern Sierra Nevada Mountains.  When their cell phones don't connect, and the mail is not delivered, the camp administrator leaves with most of her counselors for a short time to pick up the mail and to find out why the cell phones are not connecting.  She and the counselors never return.  Gradually the teenagers realize that they will have to fend for themselves.  One boy, Mike, accepts that something dreadful has happened in the world, and he convinces a group of boys and girls that they need to prepare to survive; to obtain food and water, to build a shelter where they can live during the winter, and to arm themselves as best they can.

His efforts are not always welcomed by the other campers, but when the camp is attacked, the teens realize that he is right.  They make Mike chief, and together they prepare to do what is necessary to survive.  Much of the story forcuses on the building of a shelter and the interpersonal relationships between them and some outsiders they encounter.


The man began to yell and to rant, and he threatened the teenagers, telling them in graphic detail what he would do to them if they did not release him.  Some of the kids were so frightened of the man, that they begged Mike to let him go, if he promised never to bother them again.  The man struggled, but Ralph, John, and Howard held him firmly, and with some help, they pushed him to the barrel.  Mike called for some kids to hold the barrel at the ends.  Some of the Spears and some of the other kids rushed to help, and shortly there were three or four teens at each end of the barrel, steadying it.

Mike climbed onto the barrel.  Carefully, he balanced himself, and then he took the rope, and with some difficulty, he worked it over the head of the struggling, cursing man.  He had to toss the other end of the rope several times before he managed to get it over the correct tree limb, and then he jumped down.

Other kids had seized the loose end of the rope, and now they drew it taut, raising the killer’s head.  The man continued to curse and threaten them, and Mike thought about gagging him, but he did not, just in case the man decided to pray or to repent at the last moment.  The stronger teens lifted the man onto the barrel and then stepped back.  The man wavered and caught his balance.  The rope was tightened a final time, and then someone tied the end of the rope low on the tree trunk.

“Do you have any last words?” Mike asked the man.

The man face turned the color of ash as he stared down at Mike, perhaps accepting at last that he was dealing with someone different.  This kid, this small kid, this implacable kid, was going to hang him.  Finally, he was frightened.

“I’m sorry about your friend,” he muttered, hoping that this might save his life.