Because love, no matter how hard won, is always worth fighting for. 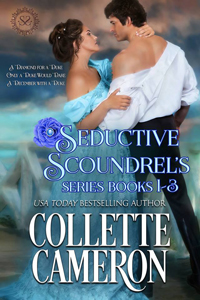 Because love, no matter how hard won, is always worth fighting for.

One thing never changes from era to era—the longing for love and the sacrifices willingly made to achieve a happily ever after. This special romance collection includes THREE STORIES of dukes and their ladies; each a charming and humorous Regency romance with a dash of mystery & suspense.

A Diamond for a Duke:

A dour duke and a wistful wallflower—an impossible match until fate intervenes. Jules, the Duke of Dandridge wants more than Jemmah Dament’s sweet kisses or her warming his bed. He must somehow convince her to gamble on a man who’s sworn never to love again.

Only a Duke Would Dare:

A reluctant duke. A vicar’s daughter. A forbidden love. Victor, Duke of Sutcliffe ventures home, intent upon finding the most biddable and forgettable miss in Essex to wed. Except he finds himself powerless to resist Theadosia Brentwood—even if she is promised to another and the exact opposite of what he thought he wanted in a duchess.

A December with a Duke:

He’s entirely the wrong sort of man. That’s what makes him so utterly right. After a horrific marriage, Everleigh vows to never marry again, but the enigmatic Duke of Sheffield is determined to woo the beautiful widow and make her his own.

These charming historicals by a USA Today bestselling author will warm your heart and bring a smile to your face. You might even giggle, and you won’t be able to turn the pages fast enough to find out what happens to the characters next.

If you enjoy emotional friends to lovers, enemies to lovers, Cinderella, or wallflower love stories then you’ll adore Collette Cameron’s enticing SEDUCTIVE SCOUNDRELS SERIES. Buy the collection and settle into your favorite reading nook with your beverage of choice for rousing, romantic adventures you can’t put down.


A Diamond for a Duke

A pox on duty.

A plague on the pesky dukedom too.

Not the tiniest speck of remorse troubled Jules, Duke of Dandridge as he bolted from the crush of his godmother, Theodora, Viscountess Lockhart’s fiftieth birthday ball—without bidding the dear lady a proper farewell, at that.

She’d forgive his discourtesy; his early departure too.

Unlike his mother, his uncles, and the majority of le beau monde, Theo understood him.

Only a Duke Would Dare

The same tormented baritone rasped through the burial ground once more.

That, by Jehoshaphat, she had not imagined.

She stopped again and turned in a slow circle, trying to peer around the greeneries and headstones. Many were large and ornate, and she couldn’t see past the nearby stone markers.

A December with a Duke

How many times had she witnessed that very thing during the two miserable years she’d been wife to Arnold Chatterton? How many times had her depraved husband carried on with one shameless gillflurt or another whilst Everleigh barricaded herself in her bedchamber to escape the vile intentions of the other debauchees in attendance?

A shiver juddered across her shoulders, and she firmed her mouth and gave a little shake of her head.

He had been for almost two years.

He couldn’t hurt her anymore.

Neither could his son.