Pursued by the Playboy by Jill Blake

What happens when a bachelor who’s finally looking to settle down meets a career-driven woman who doesn’t believe in love? 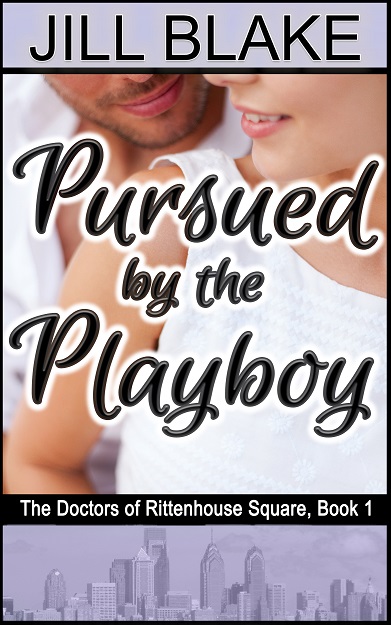 A bachelor who's finally looking to settle down meets a career-driven woman who doesn't believe in love...

Kate Warner isn't interested in romance.  After years of bearing silent witness to the disaster zone of her parents' marriage, the last thing Kate wants is a husband and kids.  Besides, she's on the fast track to academic success at an Ivy League university.

Enter Dr. Marc DiStefano, star of the university hospital's department of gynecology.  Tired of the Barbie-doll wanna-be's of his past, he's looking to settle down. And he's set his sights on Kate.

…That's when the problems begin.


Kate Warner tugged up the low-cut bodice of her black gown. In a closet full of functional clothes, it was the only item that fit tonight's dress code. If only she didn't feel so exposed wearing it. She glanced around at the clusters of guests in evening couture. Jewels that cost more than her annual salary winked beneath the chandeliers of Philadelphia's Four Seasons ballroom. Her own neck and hands felt conspicuously bare.

"Stop fidgeting," Jake murmured at her side. "You look fine."

She sighed. "Right. This from the man who wears cowboy boots for every occasion."

"Don't get snippy," he said. "They're Luchesse Classics. Hand-tooled leather, custom made."

"Of course." She glanced down. The boots were black and polished to a high sheen. But here, at a fundraising gala for ovarian cancer research, thirty-plus miles from the nearest horse ranch, they were as out of place as Kate herself.

He flashed a grin. "Come on, let's find out table. Looks like the festivities are about to begin."

Kate's palms started sweating again, the satin clutch in one hand nearly slipping as she followed Jake through the crowd. She'd rather spend Saturday night getting a Brazilian wax. Or filling out budget justification forms in triplicate. But as one of tonight's honorees, she didn't have the option of not showing.

It could have been worse. Instead of Jake at her side, she could have braved the crowd alone. A faint shudder rippled through her.

Or she could have attempted to mediate a cease-fire between her parents earlier that evening. But the likelihood of such a truce breaking down midway through dinner had her phoning Jake in a panic. By the time he pulled up to the curb where she as waiting, her stomach burned from the three ibuprofen she had dug up from her overnight bag and swallowed dry.