Prayer Handbook for the Reward of Inheritance by Ekeregbe P. Merit

Prayer is hard work, and it requires energy. 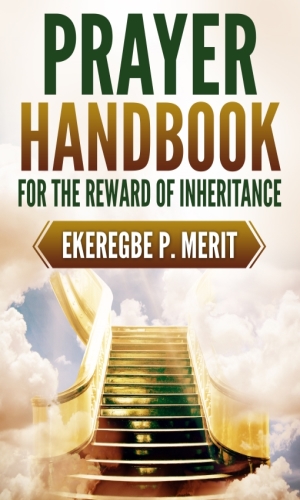 The prayer handbook deals with total recovery package revealed by the “The Reward of Inheritance” that one who has accepted Jesus is entitled. This recovery is benched on salvation and its revelation. One might be saved and still be under yokes except the salvation comes with divine revelation. The light of revelation is what drives the warfare to recover the inheritance. The inheritance is bulky, and a stock-in-trade and only those who have access to the grace of salvation can enjoy same. It is available to anyone who chooses to purchase same. The currency is a capsule of salvation, knowledge and the inheritance passion or claim-drive. The knowledge and the revelation you have through the book “The Reward of the Inheritance” is the propulsion to declare your victory through the prayer actions in this handbook. “And he spake a parable unto them to this end, that men ought always to pray, and not to faint,” Luke 18: 1 (KJV). Prayer is hard work, and it requires energy. The revelation the word provides should be a bolster for the claim of the inheritance. This drive produces no result except it is converted in praying for the inheritance. This prayer manual details the prayer demands, though not exhausted, for a chase and recapture of the life of the inheritance as the benefits that fall with the knowledge if the prayers are said as pushed by the Holy Spirit. The experience of the Holy Spirit cannot come to bear on any desirer of the inheritance except that one is saved. Praying is a reliable weapon for the takeover of the lost legacy.


The prayer manual “Handbook On The Reward of Inheritance” is written to give power to the revelations in the book: “The Reward of the Inheritance.” When a revelation is received over very salient issues of life, and if nothing is done about it, it is tantamount to no revelation gotten at all. It would have been better one did not know than knowing without taking decisive action. If nothing is done, it means merely resigning to fate and waiting for the click of time to fall on the awaiting disaster.  This is the reason the book is accompanied by this prayer handbook. The book is an inspired recession into the profound things which God has made available to the church so that the body of Christ would re-awaken the sleeping giants whose destinies and inheritances are crying for attention. This book is hoped to reawaken and strengthen the call of destiny and inheritance which you may not have exploited to the maximum that the Wisdom of God and His providence has supplied. So as you read the book, you are expected to pray along using this prayer handbook. The revelation you get from the main text provokes a holy uprising to take over your possession, and this prayer handbook would serve as a guide.

Some of the prayers in this handbook will not convey a more profound revelation except you read the main text to which these prayers relate. The knowledge of the revelation in the main book and the prayers accompanying same in this handbook will arouse in you the hunger and strength to take a stand against the enemies of your inheritance. With the help of the Holy Spirit, it is believed that as you prayerfully read the book, your lot in Christ would not only be released to you but you will see that you have actually taken a grip of your destiny to fulfilling it.