Playtime with Sera by Dee Dawning

Sera’s husband Marc runs into his roommate and best friend from college, who happens to be Sera’s ex-husband. Sparks fly and soon Marc is having to make decisions a husband should never have to make. 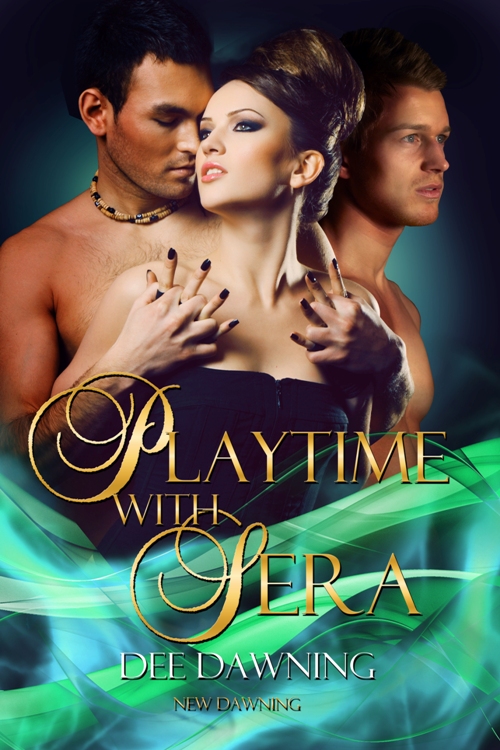 A voice mail from her hubby, Marc, informs Sera that he and an old school chum are going out for drinks, and he wants her get all spiffed up and meet them at Christo’s for dinner and a night of dancing.

At the restaurant, she takes a hard right into the lounge and bangs into Marc’s school chum, Jack, who also happens to be her fabulous-looking lady killer, Jack. The unlikely situation prompts a degree of discomfort for all.

As the night wears on, it becomes apparent to the ex-husband and wife that although the bonds of matrimony were severed, their original burning attraction was as strong as ever. This forces Marc to make a decision a husband should never have to make.

Is this a case of fuzzy math where one plus one equals three?


This is book four of my Sensual Awakening Series, The main characters in all six books in the series end in hea polyamorous relationships. Sales have been good but not as good as the longer, lower numbered books. Book one Jasmine's Urban Cowboys is the current best seller but it is priced lower to generate sales of the other books.It is currently available for translation as is the 5th & 6th books


It all started with a phone message. “Hi baby, it’s me. I ran into an old buddy today who I haven’t seen since college. We’re going out for a couple drinks at five, and well…I’d like you to meet Jack. Why don’t you get all fixed up like you do? You know—good enough to eat—and meet us at Christo’s for dinner. I’ll make reservations for seven at three, umm, better make that three at seven. I love you.” He finished with a kiss.

Oh well, Marcus was rock steady, nice looking, great in bed, too, and—and this was a big one—he made her laugh. Life was fun with Marc. She missed him already. She had better go and make herself pretty like he asked.

At six-fifteen, she pulled up to the valet. She took a quick look in the rearview mirror and reassured herself she looked good. She did. She should. Beauty was her business. She was a fashion model.

After the valet picked his jaw up from the ground, he opened the door of her six-figure Mercedes convertible. She got out and strutted into Christo’s as if she didn’t have a care in the world, which she didn’t…yet.